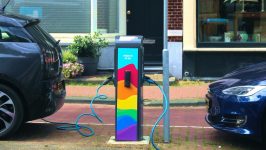 All proceeds generated at more than 100 stations throughout the city will be donated to the Dutch LGBTQ association COC. A similar campaign two years ago raised over 3,500 euros.
evbox.com

A VW e-Golf gets a nip, tuck and power boost