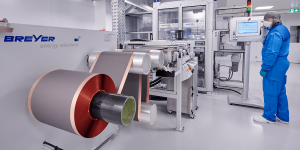 BMW has received a grant of 60 million euros from the German federal government and the state of Bavaria for battery research. BMW apparently plans to use the money to establish its own pilot battery cell production in Parsdorf near Munich.

The funded research has the goal of “creating a closed and sustainable material cycle for battery cells”, which means developing, piloting and testing a new generation of lithium-ion cells. The Bavarian Minister of Economic Affairs, Hubert Aiwanger, and the Parliamentary State Secretary to the Federal Minister of Economic Affairs and Energy, Thomas Bareiß, handed over a corresponding funding notice to BMW. The Bavarian car manufacturer is part of the Important Project of Common European Interest (IPCEI) created to support battery production in Europe.

In December 2019, the EU Commission approved state aid for battery research totalling 3.2 billion euros. The approval was granted for projects in seven member states across all segments of the battery value chain. In Germany, BASF, Opel and Umicore are to receive funding along with BMW and Varta. The German government has made a total of 1.5 billion euros available for this purpose.

In the case of BMW, Bavaria will assume 30 per cent of the funding, with the federal government contributing 70 per cent. “Battery research is a central high-tech topic in Bavaria and Germany,” says Aiwanger. “This funding will decisively strengthen research and development as well as the establishment of mass production of lithium-ion cells and secure Bavarian value creation in a central future topic”.

State Secretary Bareiß described the initiative for battery cell production so far as a “great success”. “We want to produce the best and most efficient batteries”, said the State Secretary. “The German automotive industry expects around ten million electric vehicles to be sold in 2030. It is therefore of great interest to us that we create our own innovations and value-added networks in battery cell production.”

BMW is working on various areas of electric drive systems in Bavaria. The Dingolfing plant is home to the E-Drive Production Competence Center, where battery modules and ready-to-install battery packs are manufactured in addition to electric motors. In November 2019, BMW opened the Battery Cell Competence Center in Munich, where research is being carried out into the technology surrounding battery cells – but the funding is apparently being used for another project.

At the beginning of July, there were reports that BMW was planning a pilot battery cell production near Munich, which, although it exceeds the capabilities of the competence centre, is still far from reaching the scale of large-scale production. The company has now confirmed the rumours: At the end of 2022, the plant in Parsdorf is scheduled to go into operation, and BMW has announced investments of 110 million euros. With the pilot plant for the production of lithium-ion battery cells, “the company is taking the next logical step to penetrate the depths of the entire value-added process for battery cells”.

BMW’s Board Member for Production Milan Nedeljković also speaks of deepening the competence in the field of battery cell production, which up to now has mainly been in the hands of production partners in Asia. “We will be able to test new plant technology and try out innovative production processes,” says Nedeljković. “Our aim is to optimize the near-series production of battery cells in terms of quality, performance and costs. With this new pilot plant, we are closing the last gap along the value chain from the development of the battery cell to the production of modules and drive components to the installation of fully assembled high-voltage storage units in our vehicle plants”.