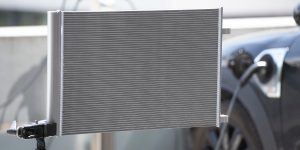 According to Mahle, the new development has a significantly higher power density and ensures that the battery is optimally cooled during rapid charging along with other components. At the same time, the new condenser provides the necessary power for temperature control of the interior.

The development of the new condenser was been prompted by the increase in overall demands on cooling systems in hybrid and electric vehicles where the battery, power electronics, electric motors and other components must all be kept within a carefully defined temperature window.

In contrast to an internal combustion engine where the required cooling capacity is relatively constant in most applications, electric cars can temporarily require high cooling capacities, such as during rapid charging. To meet these requirements with current technology, the condenser, where the heated coolant is liquefied again, would be considerably larger and heavier.

This is where Mahle wants the production process to be optimised so that the condenser is flatter, lighter and less susceptible to corrosion. In addition, the amount of the necessary coolant has apparently been reduced. The new production process creates a folded multi-chamber tube that significantly increases the condensation performance in the same installation space, as a spokesperson explained when asked by electrive.

According to Laurent Art, Head of Advanced Development Thermal Management at Mahle, the company was able to benefit from his many years of work on combustion engines, even if the tasks of thermal management have shifted. “The subject of battery cooling is a key factor in the performance of electric vehicles,” says Art, “We are convinced that this capacitor will give a further boost to the development of electric vehicles.”