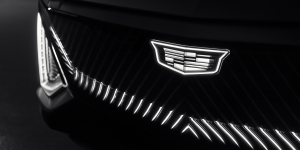 Cadillac has introduced the concept of its first electric model. The SUV ‘Lyriq’ gives a glimpse into the GM brand’s electric design language. However, information on the technical specifications of the Lyriq, which is expected to be launched at the end of 2022, is still sparse.

As reported, the electric Cadillac is based on the new electric vehicle platform from parent company General Motors with Ultium battery system and will be available with both rear-wheel and four-wheel drive. Cadillac is now citing the market launch in the USA at the end of 2022 as the market launch, but the American company is still silent on possible sales in other countries.

Cadillac has not yet disclosed too much technical data, for example details on the various engine and battery variants are still missing. Cadillac promises a range beyond 300 miles (480 kilometers) with a battery capacity of around 100 kWh and charging capacities of up to 19 kW AC and 150 kW DC. These are likely to be the key data of the top model, or the range could come from a possible long-range model with a large battery and rear-wheel drive. However, the exact lineup, especially with regard to range and charging capacities with smaller battery variants, is not yet known. Of the charging capacity of up to 200 kW for the 400-volt vehicles (the larger pickups are supposed to reach up to 350 kW on an 800-volt basis) that was announced at EV Day in March, only the 150 kW that is already common on the market today remained. So it remains to be seen what the Lyriq’s charging curve will look like.

Cadillac has also not yet made any statements about the dimensions and weight of the battery. This would be interesting, because in the communication the Americans promise that the new pouch cells (from the joint venture with LG Chem) will enable a simpler module design with lower cooling requirements. In addition, the electronics are to be integrated directly into the modules, which means that “compared to GM’s current electric vehicles” (i.e. the Chevrolet Bolt) almost 90 percent of the wiring within the battery pack is to be eliminated. However, GM leaves open exactly how the allegedly lower cooling requirement of the modules was achieved despite the integration of the power electronics.

As Marty Hogan, Lyriq’s chief engineer, stated at the digital premiere, the inaccurate data is due to the fact that the company is still in the development phase. Only at the end of vehicle development could one say where the range would end up. “We will do everything we can to maximize the range,” Hogan said. “Our goal is to provide a range of over 300 miles.” The performance-oriented all-wheel-drive version will probably have a range 20 to 30 miles (32 to 48 kilometers) less than the RWD model.

According to Cadillac, the model now on display is still a show car, which corresponds to “80 to 85 per cent” of the production version. It remains to be seen, therefore, whether all the features of the Lyriq will be adopted, particularly with regard to the bodywork and interior. Visually striking in the interior is above all the 33-inch LED display. This virtually merges the driver’s display with the infotainment screen in the centre console. The display will be able to display over one billion colours and have the highest pixel density in the automotive industry. In addition, the driver is to be informed by a head-up display with augmented reality function.

The exterior design at the front is characterized by the implied but closed radiator grille (“Black Crystal”) and the elaborate light installation – to speak only of headlights is not enough. The rear end with its relatively flat rear window and the rear lights that extend far into the D-pillar should also polarise. Cadillac did not specify the exact length of the concept car, but it should be closer to the XT5 (4.81 metres) than to the XT6 (5.05 metres).

Cadillac puts a lot of emphasis on design and wants to appeal to customers with values other than sober technical specifications. “Led by LYRIQ, Cadillac will redefine American luxury over the next decade with a new portfolio of transformative EVs,” promised Steve Carlisle, executive vice president and president of GM North America, with a full-bodied promise. “We will deliver experiences that engage the senses, anticipate desires and enable our customers to go on extraordinary journeys.”

One of the features that Cadillac will use to enable “extraordinary journeys” is a kind of active noise cancelling, as we know it from headphones: microphones and accelerometers should be able to accurately detect the drive and cancel out driving noise in certain frequency ranges – to achieve a “more peaceful experience” in the interior.

When the car is launched in 2022, it will have the latest version of Super Cruise, as GM calls its autonomous driving assistant. The exact scope of the system is still unclear, however.

There are also uncertainties about the production of the Lyriq. According to US media reports, a GM spokesman is said to have stated that production of the Lyriq would start in China as early as 2021 – which, at least in terms of the year, would correspond to the information from EV Day in March. Later it was alleged that production in China would start shortly after US production. However, the company did not say when and, above all, in which plant Lyriq would be built in the USA.

Update 13 August 2020: One of the aspects missing from the Lyriq Concept presentation was the price. Now there is some initial information about it, which is described by the US media as “surprisingly cheap”. As Steve Carlisle, President of General Motors in North America, has now indicated, the base price for the Cadillac Lyriq will be below 60,000 US dollars. Speaking at the JP Morgen Auto Conference, Carlisle said that “This car will need to be priced similar to how the industry prices midsize lux SUVs today”. “It’s a price that won’t be high five digits. It won’t start with a seven and it won’t start with a six.”

However, Carlisle did not specify what version of the car would be offered at that price. Cadillac is planning various battery and engine configurations of the electric SUV. If this were the price of one of the higher-quality versions with a large battery (up to 100 kWh), the Lyriq would probably be an attractive offer in the USA. However, if it were the base price for an entry-level model with only one engine and a smaller battery, the Cadillac could be expensive compared to the competition – such as the Tesla Model Y, which starts at around $50,000 – when it is launched in 2022.