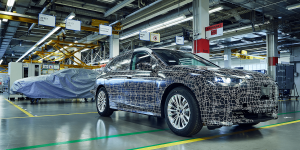 Almost two years ago, BMW presented Vision iNEXT, a preview of its purely electric, highly automated and fully networked technology flagship. As the BMW Blog now reveals, the series model will be called BMW iX and will go into production from July 2021.

The new BMW electric crossover will get a badge on the boot with the new name, the iX and three variants will each offer a different electric range with power outputs of 230, 390 and 455 kW.

Among other announced innovations, BMW is introducing what they are calling Natural Interaction which enables different ways of communicating with the car including materials that are sensitive to touch. The iX production vehicle will have this technology and it will be introduced to other high-end models in the future.

The luxury electric car will be between the X3 and X5 in size and offered with a four-wheel-drive. Optional features will include 2-axle air suspension and soft-close doors.

At the end of last year, BMW revealed preparations to produce the new flagship electric car at the Dingolfing plant starting next year. In the USA, customers will have to be a little more patient: Even though global production will begin in July 2021, US production slots will be delivered later in the year. This means it is most realistic to expect the first BMW iX units to get to the US in early 2022.