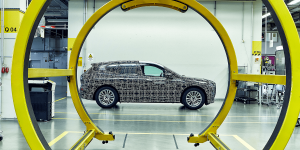 BMW is investing around €400M in the Dingolfingen vehicle plant for the production of the iNEXT. The Bavarian electric flagship is to roll off the production line there from 2021 – alongside other plug-in hybrids and models with combustion engines.

As is well known, BMW’s strategy is to produce models with different drive technologies in the required mix on a single production line. In Dingolfing, preparations are now in full swing “practically in all areas,” according to BMW headquarters. In August, for example, production on site was interrupted for four weeks to press ahead with new construction and conversions in the vehicle plant and to prepare the site for new models such as the iNEXT.

As previously reported, the Group is moving iNEXT into the centre of its new electric vehicle portfolio. Details on the model are still little known, but according to industry insiders, the iNEXT is likely to be called the i6 series model and will be launched on the market in three different performance levels. The price range will probably range from 72,000 to 110,000 euros. The basic model will only have a 250 kW engine on the rear axle and a 63 kWh battery. The middle model with all-wheel drive and 92 kWh battery probably has 320 kW, the top model 400 kW. Later it is said that a battery with 103 kWh can be ordered. Kacher also speculated about a sporty i6S with 115 kWh.

But back to Dingolfing: Currently the share of plug-in hybrids in the production there is almost 10 per cent. With the iNEXT, a fully battery-electric vehicle will be added for the first time in 2021. “Thanks to our flexible production structures, our plants are ideally equipped to meet the most diverse market needs,” Milan Nedeljkovic, Member of the Board of Management of BMW AG responsible for Production, underlines the BMW line once again. “We firmly believe that, over the next few years, there will be more than just one solution worldwide for all our customers’ mobility needs. Instead, we expect to see a mix of different drive technologies.”

In addition to electrification, the Bavarians are also keeping an eye on automation of future production vehicles in the current construction measures. The iNEXT is also intended as a trailblazer for the further rollout of these technologies, particularly when it comes to autonomous driving. In this respect, the current structural measures for the model will also benefit future models built in Dingolfing.

In concrete terms, the iNEXT will be produced alongside models from the BMW 5 Series, 7 Series and 8 Series in one of the two Dingolfing assembly halls in future. According to the Group, the main challenge lies in the fact that some of the work content of electrified and highly automated vehicles is distributed differently over the production process than that of conventional cars. “This relocation of work content along the production line ultimately also required an extension of the assembly hall and partial restructuring,” says BMW. Construction of the three-story assembly extension had already begun in summer 2018. During these months, the production facilities will be successively set up and put into operation.

This, of course, means that the vehicle plant is just a “construction site” that BMW has to complete. The iNEXT is a project in which the various parts of the plant will work together uniquely in the future. Front axle beams, the electric transmission and axles will be provided by the Dingolfingen components plant 02.10 and the Niederviehbach site, while batteries and electric motors are supplied by plant 02.20, which, according to BMW, “…is currently being massively expanded and further developed”. The company adds that “up to 2,000 employees are to work at the site in the field of electric component production in the long term.”