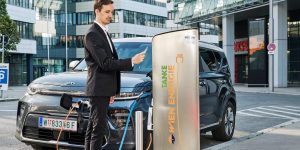 The construction of 1,000 public charging points for electric cars in Vienna that started in early 2018 is now on the home stretch. According to Wien Energie, almost 800 green electricity charging points have been set up to date, and another 50 will be added in September in several districts of Vienna.

According to Managing Director Michael Strebl, Wien Energie is in the final lap. “In the next few months we will once again step on the gas to complete the 1,000 electric charging points for Vienna,” said Strebl. According to the energy provider, this should solve the chicken-and-egg problem of the charging infrastructure in the Austrian capital.

Wien Energie operates a total of more than 1,600 charging points in the greater Vienna area, half of them in public, the other half in semi-public areas – in underground car parks, supermarket parking lots or at train stations. The company is also registering increasing demand, as it now reports. Currently, up to 10,000 charging processes per month are registered. A year ago, this figure was around 5,000, which means that charging processes have doubled, with the exception of the lockdown period in spring 2020.

However, Wien Energie sees its own public charging points primarily as a “basic charging network”. “More than 90 per cent of the charging processes are already carried out at home today. Wien Energie has therefore long demanded that legal barriers to charging stations in multi-party buildings be removed,” says Strebl. The energy supplier, therefore, not only welcomes the subsidies for the construction of private infrastructure that were increased in July, but also the announced change to the residential property law, which is to include a “right to charge” in the future. It is currently very complicated in Austria to set up a charging point in a communal garage in multi-party buildings.