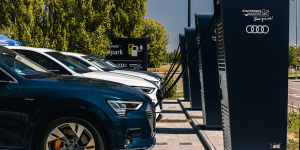 Germany apparently wants to use its EU Council Presidency to promote e-mobility. In addition to the mandatory construction of hydrogen filling stations, fast-charging stations and a uniform payment system will also be promoted.

On 1 July, Germany took over the Presidency of the EU Council for six months. In this position the German government wants to initiate some mobility projects, especially to improve the market conditions for battery electric cars and fuel cell vehicles.

The upcoming revision of the EU directive on the development of the infrastructure for alternative fuels (AFID) is apparently to be an important lever here, as reported by Tagesspiegel Background. Referring to Klaus Bonhoff, the head of the policy department in the German Ministry of Transport, it says that this revision is planned for the first quarter of 2021. But now the contents of the directive are being negotiated.

Among other things, this will take place at the virtual conference ‘Turning the page: the next chapter for electric road transport’. This is where representatives of the EU Commission, the EU member states, European interest groups and industry will discuss the future requirements. “By electrifying transport alone, we can save millions of tons of CO₂,” says German Transport Minister Andreas Scheuer. “An imperative prerequisite for this is a well-developed and cross-border network of stations in Europe, which guarantees uncomplicated and fast recharging.”

According to Bonhoff, who headed the federally owned National Organisation for Hydrogen and Fuel Cell Technology (NOW) until his move to the Ministry of Transport, the German government wants to work towards making the construction of hydrogen filling stations mandatory for all EU countries. So far, 13 EU countries besides Germany have committed themselves to this, but the current AFID directive does not include such a duty.

For battery-electric cars, the German government apparently wants to include the establishment of a Europe-wide rapid charging network with charging capacities of at least 150 kilowatts in the revised AFID directive. According to a position paper of the Federal Ministry of Transport, which is available in the Tagesspiegel Background, charging capacities in the megawatt range are to be targeted for commercial vehicles. According to Bonhoff, only these high capacities would ensure the future viability of the infrastructure. However, such a charging standard for trucks does not yet exist. The CCS initiative CharIN is currently working on a commercial vehicle standard that will enable charging with up to two megawatts.

In addition to the development of the infrastructure, Germany wants to tackle another topic as part of its presidency of the Council: The billing at charging points. “In addition to building up the grid, we have a lot of other things planned, especially in terms of customer friendliness,” said Scheuer. “We want a Europe-wide standardised payment system for electricity charging and hydrogen refuelling. A communication from the Ministry of Transport states that regulations are needed “which allow charging infrastructure to be located in all EU member states and enable easy authentication, and which ensure price transparency and uniform payment systems”.

“With e-roaming, we need regulation that ensures that no operator or user is discriminated against or has to pay an unreasonable amount,” Bonhoff said. “Every user should be able to charge anywhere with their contract.” However, the report does not contain any initial indications of how such a payment system should be implemented. It would appear that there are still some stumbling blocks on the way to practical implementation that need to be cleared out of the way.

tagesspiegel.de, bmvi.de (both in German)