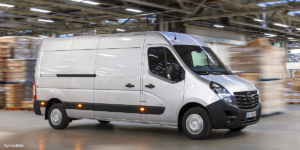 Electrically-powered commercial vehicles: Opel will also offer an electric version of its Movano van in 2021. Next year, the Opel Combo Cargo will also be available as an electric version. Meanwhile, the new Opel Vivaro-e, which can already be ordered, will be delivered from October.

This means that from next year the company based in Rüsselsheim, Germany will also be offering its complete portfolio of light commercial vehicles as electric versions. “Electrification is particularly important in the light commercial vehicle segment,” says Opel CEO Michael Lohscheller. “Whether as a delivery vehicle for the last mile or for use by craftsmen: With Combo, Vivaro and Movano, we offer our customers the option of emission-free driving in city centres in numerous individual variants”.

A brief classification: Combo, Vivaro and Movano are available from Opel in “hundreds of variants” from panel vans to tippers, flatbeds, double cabs and box bodies to custom-built vehicles. As a transporter, the Vivaro is a flexible “all-rounder”, the panel van Combo Cargo is what the Rüsselsheimers call their compact e-transporter, while the Movano is the largest of the three LVC vehicles.

Opel has not yet revealed any technical data on the announced electric Movano. As a sister model of the Peugeot e-boxer, however, the data should correspond to those of the Peugeot. The French company recently mentioned an output of 90 kW and two battery sizes (37 and 70 kWh) for (preliminary) ranges between 200 and 340 kilometres. With the Combo Cargo, Opel speaks of an “electrified version”, which could mean either hybrid or emission-free. Because of its relationship to the Citroën Berlingo Electric, which is due to come in a new version in 2021, a purely electric panel van is likely to be used here.


Meanwhile, Opel is also continuing to electrify its passenger car range. The purely electric Corsa-e and Grandland X plug-in hybrids, which have been on sale since the first quarter of 2020, will soon be followed by the Zafira-e Life as a purely battery-electric version. The new Mokka will also be available as an electric version from the start of 2021. Electrified versions of the Opel Combo Life and the all-new Opel Astra will also follow next year so that the automaker will offer nine electrified vehicles in “the most important segments” by the end of 2021.

“We promised ‘Opel will be electric’ – and we will deliver. We will also be offering all models in an electrified version by 2024,” Lohscheller emphasises, who also attests that Opel is playing a leading role in reducing their CO2 output. According to the company’s headquarters, average fleet emissions had already been reduced by 20 grams by the end of 2019 compared to the 2018 year-end figure. In addition, Opel succeeded in reducing CO2 emissions in Germany by 13.5 per cent in the first half of 2020 compared to the same period last year “the largest reduction of all manufacturers with at least a two per cent market share,” says Opel.

In addition to the rapid implementation of its electrification strategy, the Rüsselsheim-based company is also committed to establishing large-scale battery cell production in Europe. Together with parent company PSA and Total subsidiary Saft, Opel plans to set up a joint venture called Automotive Cells Company. The aim is to create a “world-class player in the development and manufacture of high-performance batteries for the automotive industry from 2023”.

DAF Trucks double the range of the CF Electric