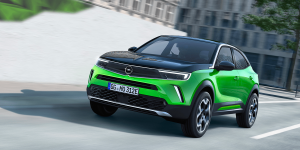 Opel has unveiled its new Mokka Electric, which will be the brand’s first model to be available in an all-electric version right from the market launch. There are no surprises with the drive system, but there are some surprises with the electric car’s design.

The Mokka E’s propulsion is provided by the electric drive train from the PSA Group’s e-CMP, which is also used in other models – from the e-transporter to SUV models such as the Peugeot e-2008, as well as the small car Corsa-e. The electric motor delivers 100 kW, the electronically limited top speed is 150 km/h. Opel/Vauxhall cites a preliminary WLTP range of up to 322 kilometres for the 50 kWh battery.

There are no surprises with the charging system either: The Mokka Electric is designed ex-works to be charged at DC charging stations with up to 100 kW. For AC charging, the Mokka E will come with the familiar single-phase onboard charger and optionally the three-phase 11 kW version. The latter will probably not be included in the standard equipment. On the Corsa-e, the three-phase charger is not available in the basic ‘Selection’ version at all, and it costs 1,190 euros extra with the ‘Edition’ version.

Much more striking than the technical data of the Mokka E is the new design of the series. The manufacturer says that the Mokka E shows a “new progressive brand face with Opel Vizor”. At the front, the LED headlights and the closed radiator grille including the brand logo are combined into one panel, which is surrounded by a narrow chrome rim. The high and almost vertical front makes the small SUV look very powerful though less safe for other road users (such as children) as is the case with SUVs. The two-tone paintwork certainly makes the car very visible.

The Mokka has become 12.5 centimetres shorter and measures 4.15 metres with the model change from the old GM platform to PSA technology. At the same time, the wheelbase has remained almost the same (+2mm). Opel thus wants to offer a comparable load volume of 350 litres, but also a more compact and agile car for the city. Especially the front and rear overhangs are shorter, which also changes the proportions of the car. The shorter, but somewhat stiffer body also contributes to the Mokka’s weight reduction by up to 120 kilograms.

“The new Mokka is a head-turner and will change the perception of our brand! With the Mokka, we are reinventing Opel and introducing our design of the next decade,” says Opel CEO Michael Lohscheller. “In addition, it perfectly embodies the Opel brand values – exciting, approachable, German – in the most progressive way. It is the first Opel that is electric right from its market start; a real proof that Opel goes electric.”

The Mokka is meant to be a pioneer for other Opel models, not only in terms of the face of the brand. For the first time, a fully digital cockpit is used in the interior, and Opel speaks of the “next generation”. The “Opel Pure Panel” relies on two widescreen displays with simple, digital readouts. The press release heralds a simplicity of design that requires: “Neither analogic displays nor fancy, useless decorative animations: The experience is clear and clean, the information provided is focused on what is really needed.” The most important functions should still be able to be used via control buttons.

The Mokka, and thus also the Mokka-E, should be available to order from summer and be delivered in early 2021. The Rüsselsheim-based company has not yet disclosed the prices for the model.

Including reporting from Sebastian Schaal, Germany.