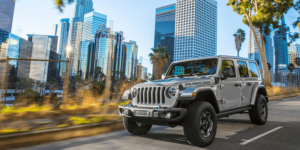 Jeep is expanding its range of electrified models with the Wrangler 4xe with plug-in hybrid drive, which will be available in Europe, China and the US in early 2021. The Wrangler 4xe follows the Renegade 4xe and Compass 4xe partly electric vehicles that are already available for order.

Technically, the plug-in drive of the Wrangler SUV has nothing in common with the part-time electric motors of the two compact SUVs. While the Renegade and Compass rely on a transaxle hybrid – the combustion engine and an electric motor drive only the front axle, a second electric motor only the rear axle – a different hybrid layout is used in the Wrangler.

The combustion engine is a 2.0-litre four-cylinder gasoline engine from FCA’s Global Medium Engine family. The turbo engine is supported by two high-voltage E engines: One sits at the front of the engine and replaces the classic alternator and starter as a motor-generator unit. For example, this electric motor is used for more convenient operation of the automatic start-stop system, but also as a generator to charge the high-voltage battery. The electric motor integrated into ZF’s eight-speed automatic is more important for the drive. The transmission with the designation ZF 8P75PH comes from the large order for hybrid transmissions which FCA placed with the Group from Lake Constance last year.

The battery is mounted under the back seat and according to the Jeep is supposed to consist of 96 NMC cells. With an energy content of 17-kilowatt hours (FCA does not indicate whether this is a gross or net value), up to 40 kilometres of purely electric range should be possible. However, this provisional figure was determined after the stricter US homologation; in the WLTP, the electrical range is likely to be somewhat higher.

The hybrid with a system output of 280 kW is thus better suited for all-wheel drive off-road operation. While the transaxle PHEV only becomes a four-wheel-drive vehicle when the rear electric machine is also running, the Wrangler 4xe has the four-wheel drive with reduction gear and electrically decoupleable anti-roll bar known from conventional Wrangler models.

The coolable and heatable battery and the entire wiring should be integrated into the Wrangler in such a way that the off-road vehicle can drive through water up to 76 centimetres high. The charging socket is located at the front left. Jeep has so far made no mention of the charging power and charging times of the Wrangler 4xe. The company also did not provide any information on the consumption of the PHEV, as European homologation has not yet been obtained. The European prices are also not yet fixed.

Jeep will also offer an electrified version of each model in the next few years.