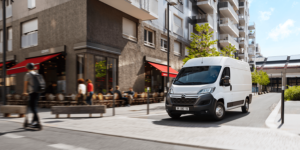 In practice, however, the range is likely to depend heavily on the load and driving profile; the ë-Jumper can transport up to 17 cubic metres or a payload of up to 1,890 kilograms. By way of comparison, the smaller ë-Jumpy can achieve a WLTP range of 330 kilometres with the optional 75 kWh battery. As a result, the ë-Jumper (with 10 kW less power) would have to consume less power despite the larger bodywork to achieve a range of 340 kilometres.

In addition, a range specification per battery size for such commercial vehicles is somewhat inadequate in any case: The ë-Jumper is available in a total of four lengths and three heights, each with different unladen weight and air resistance. The 37-kWh battery is only available in the lengths L1 and L2 (4.96 or 5.41 meters), the larger battery is available for the body versions L2S, L3 and L4 – the latter being 5.99 and 6.36 metres long respectively. PSA offers an eight-year or 160,000-kilometre warranty on the batteries, which are assembled by the supplier Bedeo for 70 per cent of the charging capacity. With this assumed loss of capacity, the smaller battery would only have around 26 kWh. If energy consumption increases in winter, there will probably not be too much left of the 200-kilometre standard range.


If the batteries run empty, they can be recharged at an AC charging facility within five hours (37 kWh) or seven hours (70 kWh). Alternatively, the batteries can also be charged with direct current (CCS). In this case, both battery variants require one hour to 80 per cent at a charging station with 50 kW.

For the versions with a permissible total weight of 3.5 tons, the maximum speed is 110 km/h, while the four-tonne version can reach 90 km/h. More than nine assistance systems are to support the driver, including a blind spot warner which is also to be able to detect vehicles at a distance of up to 50 meters.

In terms of bodywork, the ë-Jumper has the same features as its combustion engine versions. The rear swing doors open 90 or 180 degrees, and a 270-degree opening is available as an option. in addition, the loading sill can be lowered by up to seven centimetres with the adjustable rear suspension. The side sliding doors are up to 1.25 meters wide.

Citroën is not yet quoting prices for the ë-Jumper, but these will follow with the market launch in the fourth quarter.