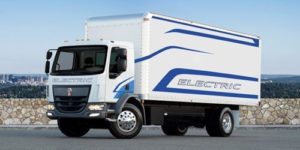 A first preview of the Kenworth K270E medium-heavy electric truck was given by the Americans at CES in Las Vegas at the beginning of the year. At that time, however, the only thing revealed was that the electric version of the classic Kenworth K270 will be offered with two range options of 100 and 200 miles, (161 and 323 kilometres respectively). This should primarily score points in local distribution and delivery traffic as well as on short distances.

Kenworth is now providing additional details on the electric model to coincide with the launch in North America. For example, the K270E has battery packs with a choice of 141 kWh or 282 kWh storage capacity located on the outside of the truck’s undercarriage. The electric motor, including the power electronics, is housed under the driver’s cab and delivers either 355 or 469 hp, the equivalent of 260 or 345 kW. The technical cornerstones of the DC rapid charging system, which is to be able to recharge the model “in just one hour”, have not yet been disclosed.

In principle, the drive, which is fully integrated into the chassis, is designed as a direct drive. In addition to a standard axle and driveshaft from Dana, it also contains its energy management, battery packs, on-board charger and software. According to American length specifications, the available wheelbases are 206, 218 or 274 inches, converted to 5.23, 5.54 or 6.96 metres. The variants accordingly have box bodies of various sizes between 7.32 and 9.14 metres in length. Kenworth made no mention of prices in the corresponding press release.

After Kenworth, Peterbilt, another US American manufacturer is cooperating with Dana on the electrification of its trucks. The latter will supply the complete electric drive train for the series version of the Peterbilt 220EV, which was introduced one and a half years ago. The few technical data published so far correspond to those of the Kenworth K270E. An interesting detail is that when the Peterbilt 220EV was introduced, Meritor was still named as the supplier of the e-axle. Since Peterbilt, like Kenworth, belongs to the PACCAR group, Meritor’s competitor Dana was apparently chosen as the supplier for the group some time ago.