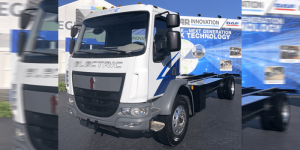 The Kenworth K270E all-battery electric truck is equipped with a Dana electric powertrain and will be offered with two range options (100 and 200 miles/161 and 323 kilometres). The range will allow the model to be primarily used in local distribution and delivery traffic as well as over short distances.

The drive, which is fully integrated into the chassis, is designed as a direct drive and, according to Kenworth’s press release, will use a standard Dana axle and driveshaft. The supplier will also supply the energy management system, which includes two battery packs, the on-board charger and software.

Kenworth has not yet revealed any further technical data on the K270E or its bigger sister, the K370E, giving only some vague details: At a DC rapid charging system, the vehicle with its “state-of-the-art battery packs with high energy density” should be rechargeable in about an hour.

“This is an important next step in our evolution of an electric powertrain,” says Kevin Baney, General Manager at Kenworth. “Dana is an industry leader in electrified modules and systems supported by in-house vehicle integration expertise.” According to Baney, Kenworth plans to produce up to 100 of the electric trucks this year.

Kenworth is already working with Toyota on the next generation of its fuel cell semi-trailer truck created in the course of “Project Portal“, the details of which were revealed in April last year. This heavy-duty model now travels more than 300 miles (482 kilometres) on one fuel stop. At the CES, Kenworth also exhibited a converted T680 heavy truck capable of Level 4 autonomous driving, but that still runs on fossil fuels.

Update Thursday 9 January 2020: Peterbilt is now the second US manufacturer to cooperate with the supplier Dana on the electrification of its trucks. The latter will supply the complete electric powertrain for the series version of the Peterbilt 220EV, which was introduced a year ago. The electrified truck is to have two battery packs and an on-board charger

The 220EV features a range between 100 and 200 miles (between 161 to 321 kilometres). Using the vehicle’s DC fast-charging system, the battery packs can recharge in around an hour. The Peterbilt truck is geared towards local pickup and delivery and short regional haul operations.