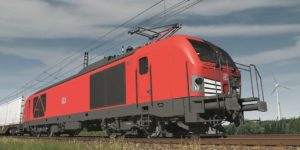 DB Cargo has signed a framework agreement with Siemens Mobility for the delivery of up to 400 hybrid locomotives. Initially, the DB 100 freight railroad will order class 248 locomotives.

The hybrid locomotives – or, as DB Cargo calls them, dual-fuel locomotives – are vehicles for DB Cargo’s mainline and shunting fleet that can run both electrically and on diesel. The investment volume of the framework agreement amounts to over one billion euros, according to a statement by the Railway Division.

Siemens Mobility is to supply locomotives of the Vectron Dual Mode type “with specific adaptations for the range of applications planned by DB Cargo”. The delivery of the units from the binding order for 100 locomotives is to take place in 2023. This locomotive suits us because it is like us as DB Cargo: big, green and powerful,” says Ralf Günter Kloß, Member of the Board of Management for Production at DB Cargo. The company is thus underpinning the environmental friendliness of rail, Kloß continues.

The Vectron Dual Mode is to be used for the transport of the freight cars to the siding of the end customer. Many diesel locomotives are still used there today, as the ‘last mile’ on the customer’s premises is often only passable with a combustion engine, even if the main line has an overhead line. So even on electrified sections of the line, diesel locomotives are often still in operation. The hybrid locomotive is designed to remedy just that: Drive electrically on the overhead line as long as possible and only switch to diesel when necessary.

DB Cargo estimates the savings potential of the hybrid locomotives from the current order at “around eight million litres of fuel and 17,000 tons of CO2 annually”. According to Albrecht Neumann, CEO Rolling Stock at Siemens Mobility, maintenance costs should also be lower than for purely diesel locomotives.

DB Cargo’s goal is to equip around 70 per cent of its diesel locomotives with innovative drive systems by 2030. Siemens will not be the exclusive supplier: In January, DB Cargo placed an order with Toshiba for 50 hybrid locomotives. The vehicles are to be manufactured in DB Cargo’s existing maintenance plant in Rostock. Here, the Deutsche Bahn subsidiary indicated potential savings of one million litres of diesel per year.