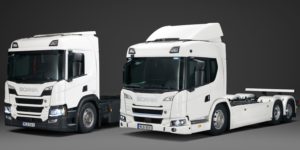 Scania has announced the official market launch of its all-battery electric truck and plug-in hybrid truck. With these two models, the VW subsidiary brand initially intends to focus primarily on urban applications.

Scania’s BEV truck delivers 230 kW and is offered with battery capacities of 165 and 300 kW for ranges of up to 250 km. According to Scania, the PHEV truck can cover 60 kilometres purely electrically.

The Swedish truckmaker has not yet revealed the prices for either of the trucks that each come with a number of body options. Both models are based on the manufacturer’s modular system and are each available with the L and P series cabs optimised for urban operation. Scania’s range of body options includes a refrigerated box, tipper, concrete mixer and refuse collector, as well as special vehicles for fire and rescue services.

Customers can also choose the battery size for the electric truck, simply called Scania BEV: With five modules, the capacity is 165 kWh, with nine modules 300 kWh. The latter provides a range of 250 kilometres, the small battery for 130 kilometres. One module is located in the engine tunnel that has been freed up, the other four or eight modules are in the chassis. The electric motor produces 230 kW.

The electric truck is charged by CCS with up to 130 kW. The small battery takes 55 minutes to charge, the 300-kWh battery 100 minutes. If the battery is not completely discharged, however, 30-45 minutes should in most cases be sufficient to recharge enough power for the next leg of the journey – if it is necessary to recharge at all during city use.

The situation is different for long-haul trucks, which Scania also wants to tackle. “We will over the coming years annually launch electrified products for our entire range and we are presently reorganising our production towards that end,” says Scania CEO Henrik Henriksson. “Of particular significance is that we will in a few years’ time, also introduce long-distance electric trucks.” Henriksson alludes here to the mandatory 45-minute rest periods for drivers, which should be sufficient to charge the battery. In other words, the charging capacity is likely to increase further in future models.

The Scania PHEV should be able to charge from 0 to 80 per cent in 35 minutes. For spatial reasons, however, only three modules are installed here, with a capacity of 90 kWh. The electric motor in the hybrid has an output of 115 kW, while the combustion engine delivers between 205 and 265 kW.

“We are convinced that progressive customers will be eager to lead the way into electrification by taking initial steps to future-proof their fleets,” says Anders Lampinen, Director New Technologies. “In major transport companies with large fleets, implementation gives them an early opportunity to gain experience in this area”.

There is one point where customers need to get used to, at least for the Scania BEV: other devices are not connected to the interface, which is usually on the engine or transmission. For this purpose, there is a DC box mounted on the chassis, which provides up to 60 kW for cooling units or a small loading crane, for example.