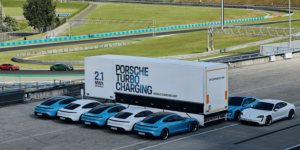 Porsche is using a mobile charging system in the form of a truck trailer that allows ultra-rapid charging at Taycan presentations across the world. Made by battery storage specialist ADS-TEC Energy, the system delivers up to 320 kWh in any weather, real-life use shows.

Porsche is using a fleet of seven charging trucks in customer driving programmes with the Taycan. “We have now used the trucks at numerous events all over Europe and have carried out around 5,000 charging operations – sometimes at extreme temperatures down to minus 40 degrees. Their performance has therefore been tried and tested,” says Ragnar Schulte, Director Experiential Marketing at Porsche.

ADS-Tec, a company based not far from Porsche near Stuttgart, debuted the initial concept and truck in March this year. Since then, they produced seven of their high power charging trucks with a proprietary charging system and buffer storage unit directly for Porsche.

And, the technical trailers’ technical specifications indeed do not disappoint. With a power rating of 3.2 megawatts, ten Taycan can be charged simultaneously at maximum speed. The battery buffer storage unit has a capacity of 2.1 MWh. This means Porsche can charge up to a total of 30 of the electric sports cars using the buffer energy storage unit and not the grid. The latter only comes in when recharging the buffer and Porsche says they generally try to use renewable power from the grid.

The company names a three-week customer event in the Portuguese city of Portimao in November 2019 as an example, where the power came directly from the nearby photovoltaic systems. Porsche also found that the trailers can be recharged very quickly, “under good conditions, they are fully charged again within four hours.”

ADS-TEC Energy GmbH is part of the ADS-TEC Group and has Bosch as an investor since October 2018. The German family business has its headquarters in Nürtingen near Stuttgart and a production site near Dresden. The company emphasises that all components except the cells are manufactured in-house.