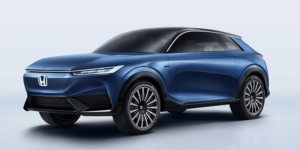 Honda has just presented the E:concept at the Auto China trade show. The e-SUV study is a preview of a purely electric production model for the Chinese market. The Japanese automaker also presented the CR-V PHEV that will go on sale in China in January 2021.

Honda has not yet given any details about the drive system of the brand’s first electric vehicle in China. They instead only mention connectivity, safety and an omnidirectional ADAS (Advanced driver-assistive system). Honda says that the E:concept series version will combine mobility experiences that “offer a value that should remain fresh and entertaining for customers”.

There is also little concrete information available at Honda’s second show premiere, the CR-V PHEV. Although sales of the PHEV-SUV are scheduled to start as early as January 2021, Honda is not providing any technical specifications. Honda only says that the plug-in hybrid will use a system that realises the “most EV-like feel.”

Honda says that the plug-in hybrid is based on the “original Honda 2-engine hybrid system”. The system called i-MMD (intelligent Multi-Motor Drive) is also used in the CR-V hybrid available in Europe. However, it is still unclear to what extent the electric drive components have been adapted for the PHEV.

Honda has not yet given any indication of whether it intends to offer the two models outside China. The CR-V as a hybrid is already on sale in Europe, as mentioned, and a PHEV version could expand the range. In October 2019, Honda announced that it would accelerate its e-strategy in Europe by three years. Among the total of six announced electrified models, a “stylish SUV” is to be included. It is unclear whether this is a European version of the E:concept now being shown in China.

Honda has catching up to do with electric cars in China. Since 2019, the Japanese company has been offering the VE-1 with its joint venture partner GAC. This is also the case with Honda’s joint venture with Dongfeng, where the number of electric models is relatively meagre.