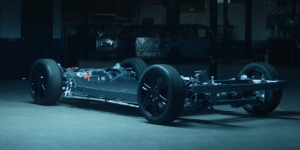 Canoo’s flat skateboard platform developed in-house is at the heart of the young company’s growth strategy. It builds the base for their own models but has also been made available to third parties such as the Hyundai Motor Group, for example. They announced in February they would develop an electric platform based on the Canoo architecture.

In their announcement today, Canoo again stressed their platform was “highly versatile”. While the promo video shows a fun application as in electric race karts, the company added technical detail and a vision for more utilitarian use cases such as delivery vehicles.

They also mention a steer-by-wire system, which was inspired by performance race cars. The set-up again adds versatility by eliminating the mechanical steering connections between the cabin and skateboard. This way, the steering wheel can be moved to suit any cabin design or driver positioning, and Canoo mentions right-hand drive adaptation and again future delivery vehicles.

Apart from the steering, the skateboard architecture also houses “all of the most critical components,” says Canoo, including a transverse composite leaf spring suspension system, the electric drivetrain, a proprietary battery compartment and battery thermal management systems, power electronics, vehicle controls, crash absorption structures and autonomous driving components, among others.

“We wanted to showcase our skateboard’s performance and prove that our rolling chassis is a truly self-contained unit with everything needed to drive built inside,” said Ulrich Kranz, co-founder of Canoo, formerly Evelozcity. He added that this would bring development time for new electric vehicles down to 18-24 months.

Indeed the company’s achievements to date include the production of a beta vehicle within 19 months and the completion of more than 50 physical crash tests. In addition to the debut electric vehicle named Canoo for the urban environment in 2022, Canoo has announced an electric delivery vehicle for 2023 that will compete on the last mile. The company today confirmed their timeline.

Both vehicles will rely on a subscription model that comprises an all-inclusive package at a fixed monthly price, covering maintenance, insurance and charging, among other things. Subscription for the upcoming 7-seater is open since January, predominantly in the Los Angeles area as reported.

What is new is a sport vehicle to come thereafter, but Canoo has yet to supply further detail.

In the meantime, the company is preparing to go public. Completion of the transaction is targeted for the fourth quarter of 2020. Canoo Inc. will be listed on the US Nasdaq stock exchange under the ticker symbol CNOO.