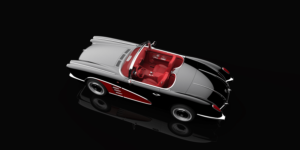 Copycat technology from China is nothing new – this year at the Auto Show in Beijing, local manufacturer Songsan Motors presented a Corvette and a VW T1 clone.  However, unlike the originals, the Chinese offshoots can drive electrically because Songsan Motors installed a plug-in hybrid drive in both vehicles.

The heavily Corvette-inspired SS Dolphin is a plug-in hybrid with a turbocharged 1.5-liter engine combined with an electric motor. The powertrain is reportedly sourced from BYD and the 16 kWh battery pack enables a purely range of 56-62 miles. Acceleration from 0-62 mph can be done in 4.9 seconds. With a price starting at ¥590,000 (€74,246), the SS Dolphin is nearly 50% more expensive than a brand new Camaro in China.

The Songsan ‘Summer’ is heavily inspired by Volkswagen’s T1 ‘Bulli’ transporter, and features the same hybrid drive. Interestingly enough, this follows not too long after Volkswagen released their very own e-Bulli.

Age is no guarantee for wisdom

were newly registered in the EU in the third quarter of 2021.