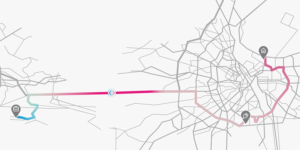 Porsche has revealed more details on its predictive thermal management system developed by Porsche Engineering last year as a study. The system is designed to ensure that electric car batteries are at the optimum temperature for charging at maximum power upon arrival at the charging station.

The temperature of the battery cells plays a key role in electric cars since charging performance decreases if the cells are too cold or too hot. Until now, thermal management has basically been reactive: if the sensors measure temperatures that are too high, cooling is activated, or vice versa – if temperatures are too low, battery heating is activated.

In the case of combustion engines, this reactive control works well, as an engine block can be cooled down in a few minutes. However, the batteries in electric vehicles, which can weigh up to 700 kilograms, are much more thermally inert. “With them, the temperature can only be regulated very slowly,” says Björn Pehnert, specialist project manager for thermal management at Porsche Engineering.

Until now, some electric cars have been able to adjust the battery’s thermal management to optimum when the route is actively guided, and a charge stop is planned in advance: On arrival at the charging station, the cells are within the optimal temperature window for rapid charging. The problem arises because hardly anyone enters every destination into their navigation system. And without information about the upcoming trip or the planned charge stop, the system can only be reactive.

The thermal system being developed by Porsche involves a software system in the car to predict the upcoming course of the journey and control all thermal components so that the battery is optimally tempered. This look into the future also prevents unnecessary heating or cooling, which saves energy and increases the range. If the driver allows the car to “learn” how they drive, the system identifies frequently driven routes. According to Porsche, the system should be able to recognize the journey ahead shortly after the start of the drive based on these empirical values and internally create a map of the coming route. For example “five kilometres of city traffic followed by 20 kilometres of the highway at 120 kph”.


But the system is not only supposed to offer advantages when pre-tempering for charging stops: If the electric car learns, for example, that it is mainly used for short inner-city trips (in commuter traffic), the control unit can raise the temperature slightly above the normal corridor but still within the safe range. Since the vehicle knows that the journey will soon be over, the battery can cool down on its own again when the vehicle is parked. This way, the car does not have to use energy for unnecessary cooling. “10 to 30 per cent energy savings are theoretically possible,” says Ondrej Holub, who heads a software development team at Porsche Engineering in Prague.

This driving data is combined with additional information from a simulation. Models are used to simulate the thermal management from the battery to the drive and cooling system to the air conditioning system. The digital twin then indicates how the battery’s state of charge will change when the heating is turned on, for example. This data is then supplemented with a software module called a Real-Time Estimator (RTE). This software is designed to calculate the influence of driving behaviour, payload, road surface or even the paintwork – in black models, the interior heats up more, which affects the thermal behaviour.

According to Porsche, until recently, such calculations would have required powerful mainframe computers. Porsche Engineering now claims to have succeeded in ensuring that, thanks to “clever optimisation,” the software can run on a normal control unit.

The project has now been completed. According to Porsche, the concept study – including a Taycan converted for test purposes – has shown that predictive thermal management has “a high potential for series development” and can be installed in a customer vehicle in the future.

Prime Planet to make batteries for hybrids from 2022