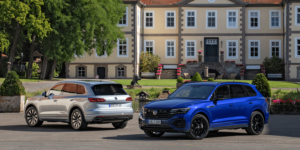 The VW Touareg is now also available in two different plug-in hybrid versions, which offer an electric range of up to 47 kilometres according to WLTP. The two performance levels are already known from other SUV models of the VW group.

The Touareg eHybrid with a system output of 280 kW starts in its native Germany at list prices from 72,378 Euro, the Touareg R with 340 kW system output is available from 84,660 Euro.

This makes the Touareg the cheapest representative of the large PHEV-SUV from the Group: The Audi Q8 PHEV announced on Tuesday costs €75,351.26 or €92,800 in the 340 kW version. Only the 340-kW version is available in the Porsche Cayenne and Cayenne Coupé, starting at €90,440.

In both performance levels, the Touareg PHEV uses a 250 kW V6 turbocharged gasoline engine combined with an electric motor installed in the housing of the eight-speed automatic transmission. This produces up to 100 kW peak. The different system outputs of 280 and 340 kW respectively result only from the different interaction of the two drives – the Touareg eHybrid is also designed for a high level of travel comfort, the Touareg R is significantly more sporty.

While the R-model is only available in the sports version with a taut tuning and sporty design accents, VW offers the eHybrid with the two options “Atmosphere” and “Elegance”. All versions of the four-wheel-drive SUV come with a four-zone automatic climate control system, the digital cockpit, the large “Discover Premium” navigation system and a panoramic sunroof. The Touareg R is also equipped as standard with the interactive “IQ.Ligtht-LED matrix headlights”.

Since the 100 kW electric motor alone delivers 400 Nm of torque, the Touareg should also be able to pull the maximum towing capacity of 3.5 tons (braked) purely electrically. For trailer operation, the Touareg also has a “Trailer Assist”, which should make reverse manoeuvring with a trailer much easier for inexperienced drivers.

According to VW, the Touareg is also the first Volkswagen that can be automatically parked and unparked via the new “Park Assist Plus with remote control” using a smartphone app – in the case of the PHEV versions both with the V6 gasoline engine and purely electrically.

of buses in China are already electric. Five years ago this was 20%.