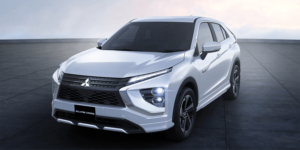 Mitsubishi has announced the redesigned Eclipse Cross, which will be offered in select markets in Asia, Europe and Australia for the first time as a plug-in hybrid with a modified version of the drive system from the Outlander PHEV.

Sales of the new model are scheduled to start in early 2021 in select markets, including Japan, Australia, New Zealand and Germany. At this point, there are no plans to bring the hybrid version of the vehicle to market in the USA. Mitsubishi does not provide any performance data, but since the Eclipse Cross PHEV basically takes over the drive system from the Outlander PHEV – albeit with modifications to match its own chassis – we at least indicate the performance of the new part-time electric motor. Since the model year 2019, the Outlander PHEV has had a 2.4-litre gasoline engine with an output of 99 kW and two electric machines (70 kW on the rear axle and 60 kW on the front axle). They receive their electrical energy from a 13.8 kWh battery. According to the manufacturer’s specifications, the purely electrical power is capable of covering 45 kilometres according to WLTP and a top speed of 135 kph.

In the course of the change of vintage, the Japanese company also gave the model a new look in comparison to the current Eclipse Cross. The front end has been given new bumper protection and a refreshed light layout, and the tailgate features a sharp hexagonal design reminiscent of the company’s characteristic rear spare tires. Altogether with the modifications, a “sleek sporty SUV appearance” is achieved, according to Mitsubishi. Information about the price is not yet available.