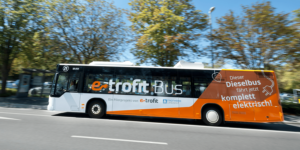 e-troFit, specialist for the conversion of diesel buses to electric drive, will bring out further series-ready electrification solutions for existing commercial vehicles in the next two years. This will involve retrofitting kits for the “most common models in Europe”.

In September, e-troFit handed over the first bus in Landshut, Germany that had been retrofitted using a series kit. The bus was a Mercedes-Benz Citaro C1 628045, which according to the company is an ageing model that is still widely used throughout Europe, especially in the Southeast European region, with around 1,000 vehicles. In the next step, e-troFit aims to provide a serial electrification solution for the Citaro C1 Facelift 628083. This will be the case in July 2021. According to e-troFit company headquarters in Ingolstadt, Germany, a total of about 7,500 vehicles of this type are on the roads of Europe.

Afterwards, e-troFit will be the turn of the Mercedes-Benz CitaroC2. According to the retrofit company, this is “the vehicle with the greatest potential for transport companies and fleet operators in the DACH region”. Series conversion kits for the C2 628033 will be available from October 2021, and for the C2 628035 from April 2022. In addition to Mercedes, e-troFit will soon be adding MAN vehicles to its portfolio and is working on conversion kits for the MAN Lion City A21 model. These will probably be available from December 2021.

The company is thus marking out the march route for the next one and a half years, and further products from different manufacturers are currently being evaluated, it is said. e-troFit deduces from its analysis of the market that “with the above-mentioned Solo bus vehicles, the market potential, when viewed conservatively, is around 8,000 conversions within the next ten years”. e-troFit says that in 2030 every tenth newly registered emission-free city bus will thus be a vehicle electrified with e-troFit technology.

The sales prices for the conversion kits including conversion range from about 300,000 to 360,000 euros, depending on the vehicle model and the requirements for the ranges. According to e-troFit there is a solution for this according to highest automotive standards and short-term availability in higher quantities. The components contained in the kits come from Voltabox, ZF and Valeo, among others. “We are currently experiencing a strong increase in demand. In and outside Europe, cities and municipalities need sustainable, cost-efficient and at the same time technologically absolutely reliable solutions to reduce CO2 emissions in public transport”, says managing director Andreas Hager.

e-troFit GmbH is a subsidiary of in-tech GmbH with headquarters in Garching near Munich. Since its spin-off in 2019, its approximately 50 employees have been working on the development, series production and sales of serial retrofit solutions. In addition to technological expertise, the company’s services range from financing consulting to project planning and implementation of charging infrastructure.