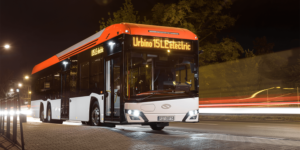 Solaris has presented its latest model, the 15-meter-long Urbino 15 LE Electric bus. It is the first product in Solaris’ electric range to travel beyond the city limits. The three-axle bus has been designed primarily for the Nordic market.

The heart of the Urbino 15 LE electric is the liquid-cooled electric central engine CeTrax from the supplier ZF with an output of 300 kW. According to Solaris, the drive system uses silicon carbide (SiC) components to reduce energy consumption. The motor drives the middle axle and is supplied with energy from a set of six batteries with a total capacity of 470 kWh. Four of the batteries are located in the rear of the vehicle, two more on the roof. The batteries are from the Solaris High Energy+ generation that Solaris presented in 2019, and provide a range “of up to several hundred kilometres”, as Solaris rather vaguely states. Since the bus model is to be suitable for intercity travel for the first time, the range is likely to be beyond the classic 150 to 200 kilometre mark.

Either way, the energy in the batteries is recharged via a plug connection and, at the customer’s request, also via a pantograph. Both roof-mounted and roof-mounted pantographs will be available. Solaris did not provide any information on the charging capacity.

The Urbino 15 LE electric offers 53 seats and two folding seats in the three-door configuration and up to 65 seats in the two-door version. Including standing room, the model can carry up to 105 passengers. The LE in the type designation of the bus stands for low entry. The bus is equipped with hybrid heating as standard, and Solaris can optionally install an air conditioning system with carbon dioxide heat pump function in the new model. The driver has several safety and assistance systems at his disposal, including the Mobileye Shield+ driver assistance system. The Urbino 15 LE electric is also compatible with Solaris’ fleet management system eSConnect.

The first examples of the Solaris Urbino 15 LE electric are currently produced mainly for Scandinavian operators, which is why they have some special solutions on board. The “Scandinavian package” includes lighting, seats designed for intercity travel and “thermal comfort” for passengers during the Scandinavian winter. According to the Polish manufacturer, the bus can also be equipped with a sanding system or a compartment for snow chains.

The background for the focus on Nordic countries is the fact that most European markets tend to demand 12-meter buses with two axles or even shorter models. If larger buses with more passenger capacity are required, operators often resort to 18-meter articulated buses. In Nordic countries, on the other hand, the 15-meter three-axle buses (without articulation) are also in demand. According to Solaris, the demand there is so high that the Polish manufacturer is again including a 15-meter bus in its range. Solaris had been offering the three-axle buses since 1999, selling almost 1,300 vehicles with diesel or CNG engines. The new generation of the Urbino 15 LE, however, will be built with electric drive only and will be offered both as a classic city bus and as an intercity bus.

Despite its design for the Nordic market, the Urbino 15 LE electric is now to be offered in other countries, according to Deputy Chairman of Solaris Petros Spinaris.