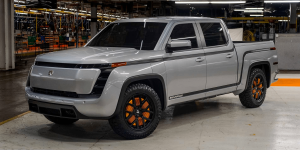 Lordstown Motors has now officially introduced its all-electric pickup truck. The Lordstown Endurance has an electric motor on each wheel, an output of 447 kW and prices start at $52,500 US. However, even the prototype leaves several questions unanswered.

As previously revealed, the electric pickup truck notably sports four electric wheel hub motors from Elaphe Propulsion Technologies. Lordstown intends to manufacture the motors itself under license at its Ohio plant. At the presentation, US Vice President Mike Pence drove a prototype of the Endurance onto the stage. The electric vehicle was supposed to show the final design of the e-pickup that looks very close to the drawings published so far.

At the same time, the event in Ohio did not reveal any new technical data or an insight into the cockpit. This means that the range remains unchanged at 250 miles (around 400 kilometres) according to the EPA test. Lordstown Motors has still not revealed any more about the energy capacity of the battery. The maximum speed of the e-pickup is to be limited by the software to 80 mph (128 km/h), and the truck boasts a towing capacity of 3.4 tons.

Production is scheduled to start next year, with Lordstown Motors aiming to produce 20,000 units of the Endurance in 2021. According to Lordstown Motors CEO Steve Burns, the first year of production is already sold out, and on stage, Pence later stated that 14,000 orders have been placed. Bruns was very confident in view of the announced competition coming from Tesla, Ford, Rivian and GM who is also planning an electric Hummer. Also Nikola intends bringing an electric pickup to market. Burns simply repeated his claim again at the presentation that “We are going to beat everyone to market.”

Despite the presentation of the prototype, some questions remain unanswered. For example, as mentioned, there is still no picture of the interior. Lordstown did allow a brief video tour of the factory floor. However, it is not clear to what extent the deserted halls, unused robots and paint shops are ready for series production of the Endurance – after all, 14,000 to 20,000 vehicles are soon to be produced here per year, which means up to 80,000 units of wheel hub motors.

The L-1500 Endurance engines specially developed for Lordstown Motors are scheduled to start in the next six months, according to information released in May this year. Lordstown is sticking to the 2021 delivery date, which will be an extremely short period between the planned production of the first engines and delivery. The wheel hub motors are, of course, a most critical component: these have not yet become established in passenger cars and commercial vehicles. Especially for a pickup truck designed for use in rough terrain or on construction sites, the wheel hub motors are a vulnerable element. Lordstown has not yet made any statements about the robustness and durability of the motors. Given the tight schedule for the start of production, the question arises as to whether Lordstown will be able to test the motors and vehicle can sufficiently before the start.

The question of financing also remains. While startup competitor Rivian has collected millions from Ford, Amazon and other investors, there is less information around Lordstown Motors. In January it was revealed that Lordstown Motors is seeking a 200 million dollar state loan to convert the former GM plant for its own needs.

It is also unclear how binding the advance orders are: Lordstown Motors evolved from the US manufacturer Workhorse. Both companies were founded by Steve Burns, at Workhorse he retired as CEO in February 2019 after financial problems. Workhorse had a plug-in hybrid pickup in development with the W-15, but the project was discontinued. Lordstown Motors took a lot of technology from this project under license along with the pre-orders for the Workhorse W-15. Whether the customers who were once interested in a plug-in pickup with range extender will now buy a pure electric pickup truck with wheel hub motors remains a crucial question.