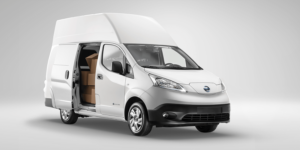 Through cooperations between Voltia and three European leasing companies, customers can use the electric van Nissan e-NV200 XL Voltia for less than 550 euros per month in leasing.

Voltia says that this rate “is a result of an innovative approach to residual values, in combination with a longer lease period and low maintenance costs, reflecting the specific benefits of an EV”. Voltia has not mentioned the names of the leasing companies in their announcement of the offer, which includes electricity, insurance and maintenance, with slight variations depending on vehicle configuration and country-specific electric vehicle subsidies.

Since May, Nissan Europe has been offering the conversion of the e-NV200, previously distributed by Voltia on its own account, as an official Nissan model. The Slovakian company is converting the Japanese electric van into a high-roof transporter with up to eight cubic meters of cargo space, primarily for inner-city logistics and delivery services. Now with the converted model, customers are buying an official Nissan model rather than a vehicle from a conversion company.

Market research conducted by Voltia had shown that the acquisition costs of electric vehicles were a major hurdle for small and medium-sized companies, including those companies that deliver on behalf of larger providers. At the rate of 550 euros per month, the e-NV200 XL Voltia would be cheaper than comparable diesel models. Voltia says that diesel vehicle leasing rates are currently going for 300 to 350 euros per month, on top of which comes some 250 to 300 euros in fuel costs. With the Voltia offer, charging costs are included in the deal.

“To be adopted, new technology needs to be not only cleaner and more reliable, but also cheaper than existing technology,” says Voltia CEO Juraj Ulehla. “This is especially true in the highly competitive segment of e-commerce logistics, which operates with narrow profit margins (2-5%) and is very cost-sensitive and risk-averse.”

Voltia’s data also showed that in the van segment, electric vehicles have a longer service life than combustion engines. The constant start-and-stop do not burden an electric vehicle, whereas diesel engines suffer. The company says that this “verifiable fact” was decisive for the cooperating leasing companies to be able to follow through on the offer.

The offer also follows on from a two and a half year pilot project to test the use of electric delivery vans in London traffic, where the cost-effective use of exactly these vans was tested in real-life conditions.