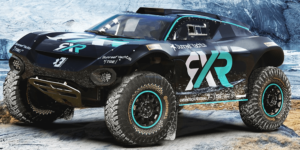 After Lewis Hamilton, Nico Rosberg also founds a team for the electric off-road racing series Extreme E. Rosberg Xtreme Racing (RXR) is the ninth team to sign up for the Extreme E.

So the racing rivalry between the two Formula 1 world champions and former Mercedes teammates now continues in Extreme E – albeit in each case in the role of team owner. For Rosberg Xtreme Racing, Nico Rosberg draws on the infrastructure of Team Rosberg, which was founded by its father Keke (also a Formula 1 World Champion) back in 1994. Team Rosberg is currently still racing in the DTM as an Audi customer team.

After ending his career in Formula 1 in 2016, Nico Rosberg became involved in the field of sustainable mobility as an entrepreneur and investor. Among other things, he became a partner in Formula E and founded the ‘Greentech Festival’ in 2019 as a “global platform for pioneering green technologies and a sustainable lifestyle”.

Like Lewis Hamilton when his Team X44 joined the series, Rosberg also explains RXR’s commitment with the focus of the series on educating the public about the consequences of the ecological crisis. “The series offers a unique opportunity not only to raise global awareness of climate change but also to stimulate action to combat it,” says Rosberg. “Since I left Formula 1 as an active driver, my career has revolved around sustainable technologies. It’s incredibly fulfilling to be able to combine this with my passion for racing”.

Alejandro Agag, founder and CEO of Extreme E, emphasizes the months of discussions that preceded Rosberg’s entry. “There is clearly a great synergy between Nico’s sustainability efforts and the goals of Extreme E, so his team is a very welcome addition to the series,” Agag said.

The first race of Extreme E, called X-Prix, is scheduled to take place in early 2021. The electric races are planned in five remote locations – Arctic, desert, rain forest, glacier and coast – to raise awareness of the environmental problems there. In the Extreme E, driving will be done with standard cars. The Odyssey 21 prototype produced by Spark Racing Technology accelerates to 100 km/h in 4.5 seconds and, vitally for off-road use, can negotiate gradients of up to 130 per cent.

Each team always consists of one woman and one man, who take turns in the cockpit. Each of the five Extreme E events will take place on an approximately eight-kilometre long off-road course on which several gates have to be passed – the driver and female driver each complete one lap. Each event consists of two race days: Qualifying races will be held on Saturdays and the semi-finals and finals on Sundays. At the end of its first season, the racing series wants to be completely climate-neutral.

Racing series ‘SuperCharge’ to take off in 2022