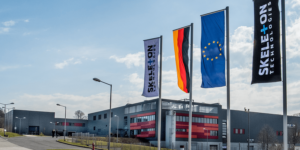 The ultracapacitor manufacturer Skeleton Technologies from Estonia has closed a new financing round for 41.3 million euros. Since its foundation in 2009, Skeleton has thus already raised over 93 million euros in capital.

According to the Estonian company, all existing investors have participated in the Series D financing round, the fourth round of this kind. Skeleton Technologies names EIT InnoEnergy, FirstFloor Capital, the MM Grupp and Harju Elekter. The first investor was also an early investor in Northvolt, the Estonian company announced in a press release.

Skeleton says that despite the health crisis in 2020, it has been able to record three times the sales growth for the second year in a row compared to the previous year although the company does not name a concrete sum. The manufacturer of ultracapacitors becomes more specific when it comes to orders on hand and says that this currently amounts to more than 150 million euros. Skeleton says that it has recently gained important new customers, including a “manufacturer of renewable energies and a manufacturer of hydrogen buses”. The existing customer base is comprised of automobile and commercial vehicle manufacturers, network operators and even the European Space Agency.

“The roadmap to zero emissions needs innovation and a mix of enabling technologies,” says company boss Taavi Madiberk. “Ultracapacitors are a key enabler for lowering emissions – we are not competing with lithium-ion batteries and hydrogen fuel cells; we are complementary in improving performance and lowering cost.”

Only in September, Skeleton announced a cooperation with the Karlsruhe Institute of Technology (KIT) to work on the development of a graphene battery with a charging time of only 15 seconds. The ‘SuperBattery’ is intended primarily as a supplement, not in place of the lithium-ion batteries in electric cars.

“The SuperBattery can avoid the typical oversizing of batteries and corresponding cooling systems, which leads to significantly lower costs and a longer service life of the systems,” a company spokesperson stated in September. “Essentially, the SuperBattery serves as a buffer for peak power loads for charging and discharging, which are normally the most demanding tasks for today’s batteries.” Skeleton Technologies says it has already signed a €1 billion letter of intent with a “leading automotive OEM” to bring this technology to market.