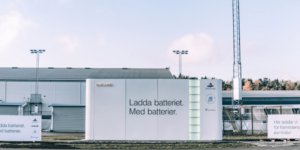 Northvolt has put its first battery system into operation at a public charging station for electric cars in Västerås, Sweden, in cooperation with the local energy supplier Mälarenergi.

The stationary battery storage system will be able to deliver up to 220 kW to the charging stations. According to the website placetoplug there is a HPC charger in Västerås, but it is not operated by Mälarenergi. The utility operates several sites where two 50 kW triple chargers and several AC charging points are offered.

Västerås is also the location of the Northvolt Labs research centre. The company’s battery cell factory, called Northvolt Ett, is located in Skellefteå in northern Sweden. The city with more than 100,000 inhabitants is located west of Stockholm and is also the headquarters of ABB.