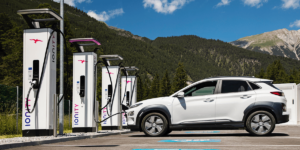 The Hyundai Motor Group’s entry into the Ionity fast-charging network is now official. The Korean company through its Hyundai and Kia brands holds a 20 per cent stake in the Europe-wide high power charging network founded by BMW, Ford, Daimler and Volkswagen.

According to the company, the responsible authorities have now given the green light for the plans they had first announced last year. Together with the South Korean car manufacturer, Ionity intends further to expand the HPC network along Europe’s highways. The goal is to build 400 charging parks with columns that deliver up to 350 kW of power. The latest statement does not specify whether “further advancing” means a faster expansion or an expansion beyond the 400 charging parks.

“I am very pleased that, with the Hyundai Motor Group and its commitment to e-mobility, we bring another strong partner aboard. The participation of the Hyundai Motor Group underlines the importance and economic potential of Ionity, as the operator of the leading high-power charging network in Europe,” says Ionity CEO Michael Hajesch. Founded in 2017, the joint venture now has 75 employees at its headquarters in Munich, Germany, and another office in Oslo, Norway.

Both sides agreed to the integration of Hyundai-Kia in September 2019. Since then, the authorities have been examining the merger. It is now clear that the Korean company will also receive 20 per cent of Ionity’s shares as the fifth carmaker in the mix. It is not known how much the group will invest in return.


It remains to be seen how Hyundai-Kia customers will benefit from the new allegiance. Since the price increase on the part of Ionity, charging services had to negotiate their own terms. In Germany, Hyundai’s preferential charging partner EnBW had removed Ionity from the tariffs following the price hike.

We are yet waiting to hear how the partnership may fit into the latest charging service that Hyundai-Kia had launched together with Digital Charging Solutions (DCS) under the labels Charge myHyundai and KiaCharge. Kia will introduce KiaCharge in seven countries this autumn, starting with Italy, Poland and Spain, followed by Austria, France, Germany and Switzerland. UK customers may expect the charging service to come active in the fourth quarter of 2020. Hyundai expects the service to launch in six countries, namely France, Switzerland, Norway, Spain, Italy and the Czech Republic this autumn.

With the Hyundai Ioniq Electric, Hyundai Kona Electric as well as Kia e-Niro and Kia e-Soul, the Korean company already has four fully-electric models on offer, with more to follow. According to earlier information from Hyundai, the new electric vehicle models will sit on the new Electric-Global Modular Platform (E-GMP) with 800-volt technology from 2021. This would allow them to exploit the advantages of Ionity’s HPC parks fully.

The first electric vehicle with this technology onboard will be an all-electric crossover based on Hyundai’s concept car 45, which is scheduled for launch next year under the new electric sub-brand Ioniq. The production model will probably be called Ioniq 5. Hyundai’s sister brand Kia will also be using the 800-volt E-GMO. The announced BEV – presumably a crossover – is scheduled for launch at the end of 2021. There are also rumours about a series model based on the Prophecy, which could also be based on the new platform.