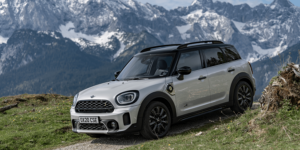 Mini has stopped delivery of the Mini Cooper SE Countryman All4 for the time being by order of the regulatory authorities. The plug-in hybrid is currently not reaching the specified electric range. An update of the battery management system shall remedy the situation.

As BMW confirmed to the German newspaper Süddeutsche Zeitung on request, the responsible licensing authority where the Mini Countryman received its type approval in Ireland has stopped delivery of the part-time electric motor. BMW had informed the authority itself about the incorrect battery electric range. The model has been sold since 2017 but received a battery update in 2019 which led to the current electric range problems.

“The Mini in question has a range of 60 kilometres when driving according to the NEDC measurement profile,” a BMW spokesman told the Süddeutsche Zeitung. According to this, the car manufacturer had found out during internal company tests that “the range is sometimes only 59 kilometres”. When they informed the authorities in Ireland, they ordered a halt to delivery.

BMW already told the newspaper that the car manufacturer wants to achieve the additional kilometres promised in the registration employing improved battery management. The update should be available at the end of November.


BMW is not likely to face problems with CO2 penalty payments due to the delivery stop. According to an evaluation by the European environmental organisation Transport & Environment, the Munich-based company, was one of the few carmakers to achieve its CO2 fleet targets in the first half of the year. With sales in Germany boosted by the innovation premium, the Group could survive the several-week delivery break for the Countryman PHEV. Unlike Ford where the recall and delivery stop of the Kuga PHEV has meant that the company cannot achieve its fleet targets, meaning that Ford had to enter into a CO2 pool with Volvo.

The speaker confirmed that BMW is aiming for a precision landing and is not willing to install a larger battery for additional kilometres. “It may be hard to understand, but we have no reason to build in a large range buffer beyond what is required by law,” the newspaper quoted the spokesperson. “We are in a fierce competition.”

BMW is not the only carmaker to have underestimated the electric range of its plug-in hybrids. At the end of October 2020, Land Rover had to admit that it was not currently able to meet the initially promised figures for CO2 emissions and electric range for the plug-in hybrid versions of the Evoque and Discovery Sport. Here too, deliveries have been temporarily suspended.

Next Citroën C3 may be a small, affordable electric car