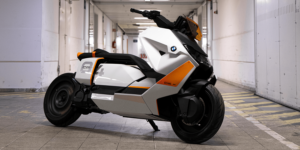 BMW’s motorcycle unit BMW Motorrad has demonstrated the near-series development of the Concept Definition CE 04 first presented in 2017. The company describes the micromobility vehicle as the “link between the analogue and digital worlds of the user.”

The German company says that this electric scooter will be both a means of transport and a means of communication for the urban commuter, but has not gone into details of what communication possibilities this entails other than being able to be connected to the rider’s smartphone. Edgar Heinrich, Head of Design BMW Motorrad, called the e-scooter “the logical continuation of the electromobility strategy for urban conurbations.” He also pointed to a possible production vehicle and of course referenced BMW’s C evolution scooter that came out in 2013.

The company says that the CE 04 “has been consistently developed and adapted to the everyday needs and requirements of the customer.” BMW Motorrad has not yet provided technical data on the drive system, focussing instead on design and connectivity.

We do know what BMW Motorrad calls the “technical realities of electric drive – such as the flat energy packs in the underfloor and the compact drive train” which enable new designs. “The new architecture has led to a visual revolution and has produced many new design themes. Maybe it will polarise, but it will definitely stand out,” continues Alexander Buckan, Head of Vehicle Design BMW Motorrad. In more concrete terms, the flat battery in the underbody allowed BMW to add a storage solution, which is illuminated and can be folded open from the side.

Another technology is not illuminated but “deliberately staged” as well, explains BMW. The side panels, for example, don’t completely cover the vehicle’s side section at the rear. Instead, they stretch across parts of the vehicle’s side like “little wings,” say the designers, allowing views of the drive unit, cooling ribs, single-sided swingarm, spring strut and tooth belt.

In terms of functionality, the electric scooter has been designed with short commutes in mind. BMW Motorcycles Head of Vehicle Design BMW Motorrad explains: “A scooter is not a ‘fun bike’ which is taken for ride in the mountains in fine weather, but a practical everyday vehicle for driving from home to the office or meeting friends in the evening – simply a vehicle for every day in the city.” BMW says the design prioritises variable ergonomics and easy accessibility over long-distance comfort.

The front end serves to protect the driver from wind and weather and the designers have given the CE 04 an elongated, flat rear end. This aims for improved ergonomics for single riders, regardless of the length of their legs and height. This would mean that the small electric vehicle is equally comfortable for men and women. At the same time, the company exclusively describes the rider as “he.” This marketing target is reflected in the clothing range revealed that appears to be aimed at male customers, which includes a parker with a high collar “…and the large hood provide an even higher level of coolness,” explains the company.

In terms of interactivity, the developers saw further potential in the interaction of the driver with the e-scooter. For example, the CE 04 has a 10.25-inch display, according to BMW Motorrad the largest display in the scooter segment to date. The display is intended to function as an “interface between the digital and analogue worlds” and, as mentioned above, can be connected to the user’s smartphone. That being said, the company has not yet described the functions that the large display is to have. Photos show a full-fledged navigation system.