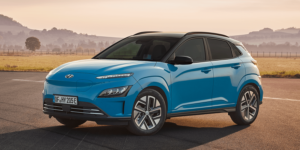 Hyundai has treated its Kona Electric to a model upgrade. While nothing has changed in the powertrain, the new Kona Electric comes with a revised design, a refurbished interior and enhanced safety and comfort features.

The facelifted Kona Electric will be available in stores from the end of January 2021. According to Hyundai, they will provide information on equipment options and prices in a few weeks.

The first thing that catches the eye when looking at the model-maintained Kona Electric is the new front: The previously closed, but still indicated radiator grille is wholly omitted, the charging port, which is yet installed at the front, is integrated directly into the bumper but since the indicated radiator grille is missing, the charging port is more striking. The narrow daytime running lights are reminiscent of the previous model, but the main headlights installed further down have been given a new look. Also new are vertical air intakes in front of the front wheel arches, which create a targeted airflow around the front wheels and thus improve aerodynamics.

At the rear, the lower lights were also changed and integrated into the bumper in a slightly different way. However, the changes only affect the plastic parts, and sheet metal remains the same. Thus the basic shape of the upper rear lights does not change.

The interior now features a 10.25-inch digital cockpit, and an equally large touchscreen on the centre console is available as an option. Depending on the equipment, the Bluelink infotainment system now offers wireless support for Android Auto or Apple CarPlay. But the Bluelink system itself has also gained additional functions with the update. According to Hyundai, these include, for example, control of vehicle and smartphone functions by voice.

Nothing changed in the two drives with the model update. The 100 kW version has a 39.2 kWh battery and is still imported from South Korea. The 150-kW version built in the Czech Republic will keep its 64-kWh battery. What is new, however, is that the 100-kW version is now also available with the three-phase 11-kW AC charger for a yet unknown extra charge. Hyundai specifies the charging time for this model as 3:25 hours, from 10 to 100 per cent; with the 7.2 kW charger, it would be five hours. The Kona with a 64-kWh battery is charged from 10 to 100 per cent in 5:30 hours with the 11-kW charger. Hyundai specifies the charging times at a rapid charging point at 47 minutes from 10 to 80 per cent (64 kWh) or 49 minutes (39.2 kWh).

Since both vehicles in the revised version have not yet been homologated for the German market, Hyundai is not yet providing consumption data. Since only the aerodynamics have changed somewhat with the new optics, these are likely to be very close to the previous values, the same applies to the range. The range is currently 305 WLTP kilometres for the 100 kW version and 484 kilometres for the more powerful model.