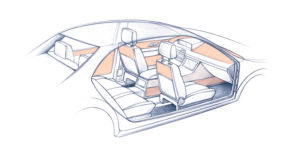 The engineering specialist IAV and Louisenthal, manufacturer of security foils and papers for banknotes, have developed an energy-efficient heating concept for electric vehicles that is intended to use far less energy while increasing comfort for drivers and passengers.

According to an announcement from IAV, the core of the heating concept is a thin, cost-effective and easy-to-process foil from Louisenthal. A network of conductors is to be embedded in this foil known as ‘SmartMesh’, which heats up when the operating voltage is applied. According to IAV, the heat radiation is then to be transferred to the interior and the vehicle occupants.

The solution with the heating foil should furthermore be more efficient than a fan heater that is intended to temper the interior with heated air. As a result, the developers promise to increase the range by up to six per cent.

The film is to be applied in doors, the center console or the roof liner, for example. Since the film is transparent, it can be combined with ambient lightning or LED design elements, according to the announcement.

According to IAV, it has simulated the application of the film with 3D CFD software and has also set up a demonstrator for a door trim. The simulation showed that “a comfortable climate in the passenger compartment can be achieved for the driver and passengers in less time at low outside temperatures thanks to the additional integrated heating foils”. In addition, the total energy required to heat the interior – i.e. including the conventional heating system – should be 20 per cent lower thanks to the thermal radiation emitted. Hence the range increase of up to six per cent.

However, IAV and Louisenthal see the heating foil as a supplement, not a replacement, for the conventional heating system in the electric car. “We can produce the SmartMesh foils on an industrial scale in large quantities, providing an energy-saving and more convenient addition to conventional heating systems for future electric vehicle concepts”, says Daniel Lenssen, Director Business Development at Louisenthal. “The foil is one example of how we are applying our technological expertise in banknote and security papers to new industries where we can provide innovative development services”.