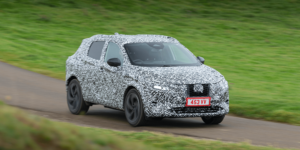 Nissan has provided a first preview of the third-generation Qashqai, which is scheduled for launch next year. The compact SUV will be the first Nissan model in Europe to be equipped with the e-Power hybrid drive but a plug-in hybrid is not planned for the time being.

The e-Power drive is a serial hybrid system, not a parallel hybrid as in the HEVs from Toyota. In the drive technology that Nissan is already using on its home market in Japan, the wheels are always driven purely electrically. The main energy source of the drive system is not the battery, but a gasoline engine that functions exclusively as a generator.

Nissan has not yet said how exactly the drive system will be integrated into the Qashqai, and above all the key technical data such as performance and consumption. The Japanese carmaker simply said this would be announced at a later date. What is clear is that the propulsion system will include a battery, generator, inverter, electric motor and a gasoline engine for charging the battery. Nissan has also not yet given data regarding the gasoline engine.

But this data would be very interesting because in the past, Nissan has explained exactly why the e-Power technology that was already introduced in 2016 has not been offered in Europe so far. “In Japan, they typically don’t go above 50-65mph. Here in Europe, you do 80-85mph on a regular basis,” said Ponz Pandikuthira, Vice President Product Planning at Nissan in Europe, in December 2019, “At those speeds, you end up depleting the battery very quickly, so the range extender has to work really hard to keep the energy going and then it goes out of its range of efficiency”. It’s not yet clear how the Japanese company solved this problem.


Since the electric motor alone is responsible for propulsion, it is naturally larger and stronger than in other hybrids. Nissan speaks of a size that is “normally found in a purely electric vehicle”. This should provide for an electric car-like driving behaviour with the direct and immediate acceleration but with a different sound backdrop.

Nissan sees the complex serial hybrid as a more economical drive than a full hybrid designed in parallel. This means that the combustion engine should always be able to operate in the optimum speed range and thus be more economical and quieter than when the wheels are driven directly by the gasoline engine. “The advanced and highly efficient powertrain options demonstrate the full innovative power of Nissan,” says David Moss, Region Senior Vice President Research and Development for the AMIEO Region (Africa, Middle East, India, Europe and Oceania). “This is particularly true for the e-Power system: it has all the advantages of an electric drive train without demanding compromises elsewhere.”

No Qashqai PHEV at market launch

In addition to the e-Power drive, the new Qashqai will also be available with a 1.3-litre gasoline engine with a mild hybrid in two performance levels. At least at the market launch of the Qashqai, there will then be no diesel on offer. The role of the e-SUV will apparently be taken over by the Ariya in the future. As early as 2019, there was speculation that the third generation of the Qashqai could receive the e-Power drive. There was even a report at that time alleging that the Qashqai could receive a PHEV drive from alliance partner Mitsubishi.

The third-generation Qashqai will be the first European Nissan model to be based on the CMF-C platform from the Renault-Nissan-Mitsubishi alliance. Thanks to this platform, the body-in-white will be lighter, safer and stiffer, according to Nissan. The body shell is 60 kilograms lighter and 41 per cent more rigid than its predecessor. This is supposed to raise “ride quality, comfort and responsiveness to the level of a higher class” and provide “exceptional protection” in the event of an accident, Nissan said. In addition, the new Qashqai will be equipped with the next generation of the ProPilot assistance system. Since the ProPilot is now connected to the navigation system, not only will lane guidance on the highway be improved, but the navigation data will also be used to adjust the speed before particularly tight curves, exits or a traffic circle.