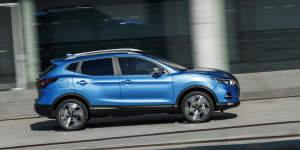 Next year, Nissan will launch the third generation of the Qashqai, which is to be electrified for the first time. According to one report, two hybrid versions will be offered, but not a fully electric version.

Auto Express reports that two different hybrid versions are planned for the new Qashqai: A version with a plug-in hybrid drive from Mitsubishi and an “e-Power” version, in which the electric drive is supplemented by a small combustion engine to charge the battery. In return, no more diesel variants will be offered for the Qashqai.

The SUV, which is one of the best-selling Nissan models in Europe, is based on an updated version of the CMF platform of the Renault Nissan Alliance and shares the technology with Renault Kadjar, for example. The e-Power drive has so far been offered in the small car Note. This is a serial hybrid: the petrol engine does not drive the wheels directly, but only generates electricity – propulsion takes place purely via the electric motor. The report does not specify exactly which Mitsubishi drive is to be used. The one from the Outlander PHEV combines a 2.4-litre petrol engine with two electric motors, one each on the front and rear axle. With the 13.8 kWh battery, the electric range is about 54 kilometres.

However, the new Qashqai will not have a fully electric drive. This is reserved for the planned electric SUV based on the Ariya concept, which is based on a new electric platform. The company justifies this decision with the costs. “A new platform is what’s best to accommodate electrified technologies,” Ponz Pandikuthira, Vice President Product Planning at Nissan in Europe, told the magazine. The Nissan Leaf and Renault Zoe were each developed independently by the alliance partners, but in the future the electric cars will also be developed on a common platform.

According to Pandikuthira, what had prevented the group from using e-Power technology in Europe, up to now was driving on the motorway. “In Japan, they typically don’t go above 50-65mph. Here in Europe, you do 80-85mph on a regular basis,” says the manager, who used to work for Daimler. “At those speeds, you end up depleting the battery very quickly, so the range extender has to work really hard to keep the energy going and then it goes out of its range of efficiency”.

The plug-in hybrid option is probably only offered in Europe for political reasons because of some subsidies and the strict CO2 limits, but not because Nissan would be convinced of it – therefore “only” the variant with the drive from alliance partner Mitsubishi. “We are not pursuing a major plug-in hybrid strategy. We will try it in some models, but the business case for plug-in hybrids is not very good,” says Pandikuthira. The PHEV is seen as a bridge technology for “the next two to four years”. Then the battery costs would decrease to such an extent that the advantages at BEV would outweigh any benefits of a PHEV.