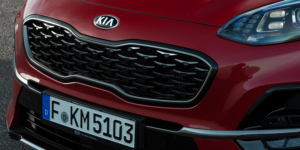 Kia is rumoured to be planning to offer the new generation of its compact SUV Sportage not only as all different kinds of hybrid but also as a purely electric version. What casts some doubt over the rumour are earlier statements by a senior Kia manager.

According to Spanish media reports, the Kia e-Sportage will be part of the drive system portfolio of the fifth generation of the Kia Sportage that will be introduced in April 2021 and go on sale at the end of 2021. However, technical data such as battery capacity, performance or range are not yet mentioned in the reports. Since no sources are mentioned in the articles, the information should be treated with caution.

Nevertheless, should the rumours prove true, an e-Sportage would be remarkable, as it would distinguish Kia from its parent brand Hyundai. The Kia Sportage traditionally shares the platform with Hyundai Tucson. Hyundai had already presented the new model with a completely new look in September, but electrification here is to go as far as plug-in hybrids at most. As a purely electric car in the compact SUV segment, Hyundai is planning the Ioniq 5 based on the modular electric vehicle platform called E-GMP. The Ioniq 5 is based on the Concept 45 shown at the IAA 2019.


Hyundai is also planning an electric SUV or electric Crossover based on the E-GMP platform, the corresponding concept is called ‘Imagine by Kia’. In addition to the presumably more futuristically designed Imagine, which with its platform and 800-volt battery technology is intended to emphasise the advantages of a purely electric drive, Kia now apparently wants to position the e-sports car as a more conventional alternative. And probably at a “more competitive price”, as stated by the Spanish news site, Forocoches Electricos.

What remains to be seen, is how Kia intends to implement the electric version on the electrified combustion engine platform or what performance data would be possible with the compromise. The Korean company developed the e-GMP for a reason. The smaller Kia e-Niro is based on a platform that was developed from the outset for various types of drive systems, including battery-electric cars. As to whether this also applies to the larger platform, the Hyundai Tucson/Kia Sportage, Hyundai has not yet given any indication either way.

Emilio Herrera, the IAA’s European COO, also publicly considered a purely electric version of the Ceed last year, as well as the small car Picanto. For the Sorento, however, the manager at the time only announced a hybrid and plug-in hybrid version. The Korean Car Blog, a website that is usually well-informed about Hyundai and Kia, also wrote in October that the new Sportage would take over the drives from the Tucson, which means without the electric version. We are curious to see what Kia will introduce in April.