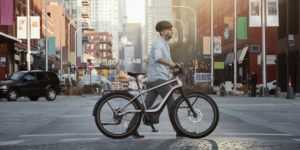 According to the manufacturer, the entry model MOSH/CTY has a 529 Wh battery on board and, according to the manufacturer, has a range of 56 to 168 kilometres. It weighs 21.9 kilograms. The 27 kilogram RUSH/CTY STEP-THRU model has the same 529 Wh battery and has a range of 48 to 144 kilometres. Also on offer: the RUSH/CTY pedelec, also weighing 27 kilograms, with a 706 Wh battery and a range of 56 to 185 kilometres. The prices lie between 3,499 and 4,699 euros. According to Serial 1, pre-orders are available immediately online or at selected Harley-Davidson dealers. Deliveries in the USA and Germany are planned for spring 2021. The fourth bike, named RUSH/CTY Speed (706 Wh, 5,199 Euro) will be marketed only in the USA for the time being. US prices for the e-bikes range from $3,399 to $4,999.
Serial 1 uses the Brose Drive S drive system in its debut models, integrated into the aluminium frame of the pedelecs and the battery. The charging connection is located on the underside of the frame. Further features of the pedelecs include Gates carbon drive belts, integrated LED lighting and four driving modes for determining the level of support, as well as a digital display and the integration of mobile applications. In addition, the RUSH/CTY models also feature the Enviolo AUTOMATiQ intelligent automatic transmission.

“From the agile MOSH/CTY, the ultimate urban play bike, to our fully capable RUSH/CTY models, which deliver three tiers of premium features, Serial 1 brings Harley-Davidson’s world-class product development capabilities to modern commuters and recreational cyclists,” said Aaron Frank, brand director, Serial 1 Cycle Company. Serial 1 is not a wholly-owned subsidiary of Harley-Davidson, but the motorcycle brand was involved in its creation. According to an earlier announcement by Serial 1, the e-bike project was born “as a secret project” at Harley-Davidson’s product development centre. A small group worked on designing and developing a pedelec “worthy of the Harley-Davidson name”.

Harley-Davidson presented designs of three e-bikes in the summer of 2019. Later, it was decided to restructure the e-bike business into a new unit, they say. As a result, only the lettering “Powered by Harley-Davidson” can now be seen on the frames of the Serial 1 bikes. Some of the members of the development group have subsequently switched to Serial 1. With Jason Huntsman (President), Ben Lund (Vice President and Product Development), Aaron Frank (Brand Director) and Hannah Altenburg (Marketing), many Serial 1 executives have experience at Harley-Davidson. The e-bikes are designed in Milwaukee.