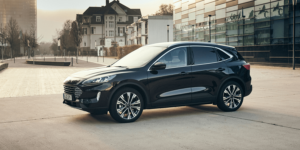 Ford is expanding the Kuga series with a further electrified version for Europe. With immediate effect, the Kuga can be ordered as a hybrid (HEV). After the mild hybrid and the plug-in hybrid, the HEV is the third electrified drive in the Kuga.

The “full” hybrid uses a 2.5-litre four-cylinder engine and has a system output of 140 kW. The gasoline engine itself has an output of 112 kW, which is unusual for this displacement in times of downsized engines. Instead of a turbocharger, Ford relies on the Atkinson cycle for the gasoline engine. At 92 kW, the electric motor is also stronger than in other “full” hybrids, all of which are entirely fossil-fuelled – a fact, Ford tries to greenwash when speaking of a “self-charging” car. When Toyota used these terms before, their ads were banned in Norway due to misleading advertising. In terms of battery capacity, the Kuga is expectedly very small. The energy content is just 1.1 kWh.

Prices for the European release of the Kuga HEV have not yet been mentioned, but in Germany, list prices are starting at 36,798 euros.

The top speed of the new model is expected to be 196 km/h, and the Kuga may complete the sprint to 100 km/h in 9.5 seconds with this engine. Simulated gear changes have been programmed into the CVT transmission with continuously variable transmission ratios.

Ford had high hopes for the plug-in hybrid in the Kuga, and the SUV model was to make a significant contribution to reducing Ford’s fleet CO2 emissions. However, the car manufacturer has not been able to get the battery problem in the Kuga PHEV under control, which is why customers are not supposed to charge the car for months and deliveries were stopped. Since Ford could not meet its fleet targets for 2020 without the plug-in hybrid, the carmaker had to enter into a CO2 pool with Volvo and Polestar.

That’s not to say Ford has been entirely idle. The company is currently, or finally, building out some of its production sites in North America to accommodate electric vehicle production. The focus is on workhorses such as the e-Transit or F-150 pick-up truck, and there is the large SUV Mustang Mach-E.