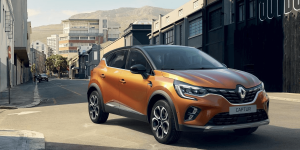 Renault releases the Captur E-TECH plug-in hybrid in the UK. Priced from £30,995 in the S Edition, the PHEV version of the best-selling Captur range is available with immediate effect. A hybrid powertrain will follow in 2021.

The Renault Captur is the carmaker’s first plug-in hybrid, with other models to follow soon. The French brand debuted the model at the Geneva Motor Show 2019. In the UK, the Captur is a strong competitor. Renault says it sold the conventional model 150,000 times in Britain since launching it in 2013. Worldwide, the Captur has been built over a million times.

As expected, Renault couples a 1.6-litre petrol engine with two electric motors and says, the PHEV is the most potent set-up in the range. The powertrain delivers 160hp and 144Nm (engine) and 205Nm (electric motor) of torque that together provide a 0-62mph time of 10.1 seconds and a top speed of 108mph (84mph in electric mode).

The motor set-up belongs to what Renault called the E-Tech line. The company claims roots in racing. The E-Tech enables energy recovery and features a multi-mode dog gearbox for smoother all-electric operation.

The Renault Captur PHEV comes in three trim levels: S Edition, Launch Edition and R.S Line. Prices start from £30,995 in the S Edition. The Captur also comes with semi-autonomous driving functions in the form of a motorway and congestion assistant.

Looking at those prices, it may pay to keep an eye out for the upcoming Renault Megane and Dacia Spring. Both models are 100% electric and have been deemed Europe’s “most affordable electric cars” when debuting in October. They will utilise the dedicated electric CMF-EV platform when launching in 2021.