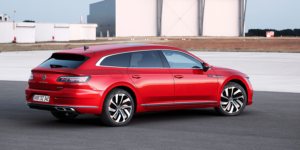 Both prices include 16% VAT and are valid until the end of the year. Volkswagen presented the PHEV duo for the first time in June. Both plug-in hybrids achieve a system output of 160 kW, a system torque of 400 Nm and accelerate to 100 km/h in 7.8 seconds. The top speed is given by Volkswagen as 222 km/h, with a maximum of 140 km/h in E mode. At higher speeds, the TSI four-cylinder engine automatically engages.

With their electric range of up to 59 kilometres (hatchback) or 57 kilometres (shooting brake), the future drivers of these models can “cover the majority of all daily distances locally without emissions,” says Volkswagen with conviction.

The Arteon eHybrid and Arteon Shooting Brake are in contrast to the Passat not linked to GTE equipment. Instead, the duo is offered in the two upscale equipment lines ‘Elegance’ and ‘R-Line’. According to the Wolfsburger-based company, Elegance includes a decidedly noble configuration, while R-Line focuses more on dynamics. On the outside, both lines score points with individual 18-inch light-alloy wheels, LED headlights including automatic high beam function, an animated flashing function for the LED taillights and independent front aprons.

In terms of the difference between the two PHEV versions of the Arteon: The Arteon eHybrid is the four-door hatchback version of the model, which Volkswagen now refers to as the “Fastback”. The Arteon Shooting Brake replicates the station wagon version and is intended to “completely reinterpret the concept of the Estate”. VW has decided to split the model into two parts: While the Passat Variant is to continue to focus on the largest possible and most usable loading space, the Arteon Shooting Brake is to score more with design and dynamics than with utility value. The Shooting Brake has a trunk capacity of 565 litres, and with the rear seatbacks folded down, it should be up to 1,632 litres. As expected, this puts the Arteon slightly below the Passat Estate, but the lifestyle station wagon should still be able to load objects up to 2.1 metres long.

Update 19 January 2021: The Volkswagen Arteon is now available in the form of a plug-in hybrid with an electrified drivetrain. The 1.4-litre TSI petrol engine is supported by a 115 PS electric motor, providing a combined total peak power output of 218 PS and torque of 400 Nm. The 13 kWh battery can provide a purely-electric range of up to 39 miles. Prices start at £39,905 OTR RRP for the Fastback in Elegance trim.