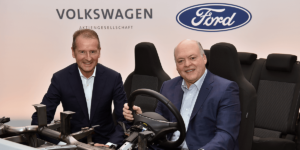 Ford has not officially confirmed the plans. According to the radio station Saarländischer Rundfunk, the company is planning to invest billions in the conversion of the plant. This is at least partly because the MEB model for the European market is to come off the assembly line there. Cologne would be the first Ford location in Europe to be awarded the contract for a purely electric car. As reported in the German publication Automobilwoche, the other sites in the race, besides Cologne, were Saarlouis, which is a good 200 kilometres to the south, as well as the Romanian plant in Craiowa.

In June, Ford and Volkswagen signed the contracts for their global alliance in the areas of electrification, light commercial vehicles and autonomous driving, thus paving the way for a Ford electric car based on MEB. The plan is to launch the MEB-based vehicle in 2023. Within several years, the American company then expects to deliver more than 600,000 units of the model, which is to “combine generous space with the advantages of an electric drive”.

With these latest plans for an MEB car, Ford is expanding its range of electric cars alongside the all-electric Mustang Mach-E and, independently of this, is planning battery-powered versions of the Transit and F-150 for commercial vehicle customers over the next two years. Volkswagen describes Ford’s use of the MEB platform as “an important cornerstone in Volkswagen’s electromobility strategy”.

For months, there has also been speculation that Ford might produce not just one but two electric cars on the MEB platform. The German trade newspaper Handelsblatt had already quoted Ford Europe boss Stuart Rowley in September 2019 as saying: “Yes, we are talking about it. From an economic point of view, he said, it would not make sense to produce just one car on an MEB basis. Volkswagen CEO Herbert Diess is also said to have explained to his own staff newspaper earlier, that the company is currently in talks about a completely new supply contract for a second vehicle.

Back in Cologne, the automotive supplier Marelli announced that it is planning to build a production facility for electric vehicle drives, which is to go into operation in the first half of 2021. After the Cologne newspaper, the Kölner Stadtanzeiger wrote on Thursday that the hall is to be located on the site of the Ford plants, further media outlets have confirmed the news. At the start of production, around 160 people are to be employed at the plant and 60 additional workers will be hired in the course of the year.