Volkswagen and Ford have now signed the contracts for their global alliance in the areas of electrification, light commercial vehicles and autonomous driving. This paves the way for a Ford electric vehicle based on Volkswagen’s Modular Electric Drive Box (MEB).

Discussions on the project have been public since summer 2019. Since then, there is no longer any doubt about Ford’s ambitions to adopt the MEB kit of its former competitor VW for at least one future electric car in Europe. Both partners are now confirming the details: Ford will launch the MEB electric car in 2023. Within several years, the American company is expecting to deliver more than 600,000 units of the model, which is to “combine generous space with the advantages of electric drive”.

The electric car is being developed in Cologne-Merkenich in Germany. Ford is thus expanding its range of electric cars in addition to the all-electric Mustang Mach-E and, independently of this, is planning battery-electric versions of the Transit and F-150 for commercial vehicle customers over the next two years. Volkswagen describes Ford’s use of the MEB platform as “an important cornerstone in Volkswagen’s electromobility strategy”.

“Commercial vehicles are fundamental to Ford today and an area where we will accelerate and grow, and working with Volkswagen on these platforms will provide both of us significant financial advantages in things like engineering, and plants and tooling,” said Jim Farley, Ford chief operating officer. “Separately, Ford will add battery-electric versions of Transit and F-150 in the next 24 months for commercial customers who increasingly need zero emissions and the power of connectivity, data and artificial intelligence.”

There has also been speculation for months that Ford could realise not just one but two electric cars on the MEB platform. The press release regarding the signing of the contract merely states that the company wants to examine further possibilities for cooperation on electric vehicles. In September 2019, the German paper Handelsblatt quoted Ford Europe boss Stuart Rowley in September 2019 with the words: “Yes, we are talking about it. From an economic point of view, it would not make sense “to produce only one car on an MEB basis”. Volkswagen boss Herbert Diess is also said to have previously stated to his own staff newspaper: “We are currently in talks about a completely new supply contract for a second vehicle.” Volkswagen’s own staff newspaper is also quoted as saying: “Yes, we are talking about it. Ergo, VW could almost double its deliveries of MEB platforms to Ford.” 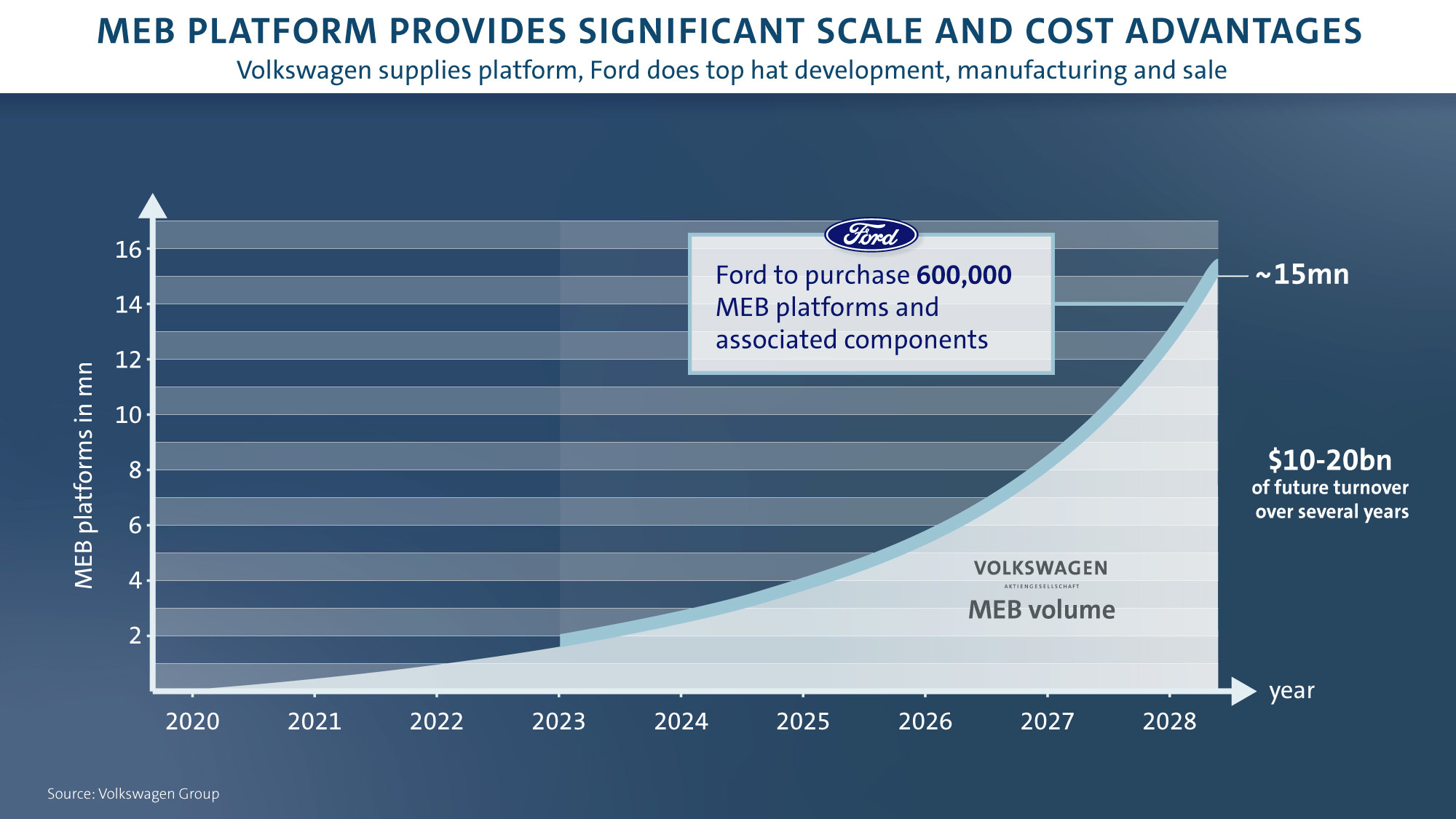 Upon the recent signing of the contract, both companies emphasised the belief that it is more important than ever to form strong alliances between strong companies during economic difficulty due to the Corona crisis. Both companies expect the cooperation to reduce development costs and enable greater global distribution of electric and commercial vehicles. The two automaking giants see the collaboration as decisively strengthening their respective companies.

Ford CEO Jim Hackett said: “This alliance comes at a time of tremendous enthusiasm about the intersection of increasingly intelligent, connected vehicles in an ever-smarter world.” Hackett explained that: “This creates a huge opportunity to innovate and solve many of the world’s transportation challenges and deliver extraordinary benefits to customers – even as companies need to be selective about how they use their cash.”

In addition to cooperation in the field of e-mobility, the forged alliance also envisages the construction of a medium-sized pickup truck designed by Ford, which is to be included in the model range of Volkswagen Commercial Vehicles from 2022. Including two other commercial vehicle projects, the partners intend to develop and produce a total of around 8 million vehicles. In the field of autonomous driving, both groups rely on the Self-Driving System (SDS) from Argo AI. Volkswagen recently completed its announced investment in Argo AI and Ford already holds ownership and development shares in the US technology company.