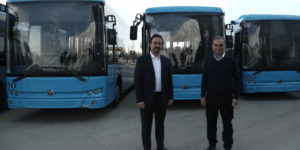 The Turkish bus manufacturer Temsa is exporting its first electric buses to Sweden. Six units of the MD9 electriCity will be in service with the bus company Connect Bus in and around the island region of Öckerö.

The Turkish bus manufacturer with headquarters in Adana has established connections to Sweden, among other things at the summit meeting of the International Association of Public Transport (UITP) in mid-2019. At the summit, the company presented its Avenue Electron and MD9 electriCITY electric models.

The MD9 electriCITY chosen by Connect Bus when first presented, was 9.5 meters long and, according to Temsa’s technical data sheet on their website, appears to be the first model as shown at the UITP, which has 26 seats and can carry up to 63 people. This model’s electric motor has 250 kW and the battery 200 kWh. The manufacturer puts the range at 230 kilometres. Temsa also states in the datasheet that the 9.5-meter bus can be charged in two hours with a 150 kW charger and in six hours with a 50 kW charger.

At the time, when this bus was presented in summer last year, the Turkish company hinted at what was to come: “Thanks to our advanced technology, we are able to integrate batteries with capacities ranging from 240 to 360 kWh into our vehicles so that our customers can choose according to their planned size and passenger capacity,” said Temsa CEO Hasan Yildirim according to a press release at the time.

That breakthrough appears to have happened. In a press release in connection with the export to Sweden, Temsa refers to different performance data for a maximum of 59 passengers, a 230-kWh battery and a range of 400 kilometres. This appears to be the pre-announced latest model talked about last year, but not yet updated on the company’s website.

Tolga Kaan Doğancıoğlu, Temsa’s current CEO, tells how the Swedish company Connect Bus Board of Directors recently visited the Temsa plant in Adana to be convinced of the buses on-site: “Here, they had a chance to witness our vision and passion for electric vehicles.” Doğancıoğlu explains: “The The future of public transport in the world will be shaped by the focus on electric vehicles. We are now entering a phase in which we will achieve even greater success in foreign markets. We have taken the first step by exporting to Sweden”.