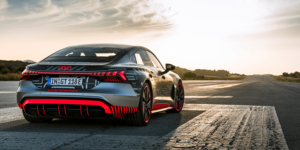 Following the Volkswagen Group, the Audi brand has now also decided on its investment planning round for 2021 to 2025. This provides for a total sum of around 35 billion euros, particularly for future vehicle projects.

Audi wants to invest more than half (around 17 billion euros) in future technologies and have earmarked about 15 billion euros for electrification. In concrete terms, the VW brand will invest approximately 10 billion euros in pure electric mobility and 5 billion euros in hybridisation. As announced last year, Audi intends to offer 30 electrified models by 2025, 20 of which will be purely electric.

The last official statement on the development budget for electromobility dates from December 2019, even before the current CEO Markus Duesmann took over. At that time, 12 billion euros were earmarked for electrification by 2024, but Audi communications made no distinction between purely electric and hybrid drives.

The financial leeway for the future topics related to drives and digitisation is to be created elsewhere: Through synergies within the Group – such as the electric vehicle platform strategy and software development, Audi intends to save billions. Progress is also to be made in terms of fixed costs, streamlining the product portfolio, and savings on non-vehicle-related investments.

“With the investment planning that has now been carried out, we are making Audi stronger for the upcoming transformation of the core business,” says VW CEO Herbert Diess, who also chairs the Audi Supervisory Board. “Technological leadership in electric-powered and fully networked driving is the aim of the supervisory board and management board. We are providing Audi with the necessary resources for this,” says Herbert Diess, Chairman of the Supervisory Board of AUDI AG.”

Peter Mosch, Deputy Chairman of the Supervisory Board and Head of the Central Works Council at Audi, sees the investments in electrification, hybrid technology and digitisation as “very important in the transformation”. “This benefits us in many projects, and also in creating high-quality jobs,” says Mosch. “The Audi sites at Neckarsulm and Ingolstadt will derive long-term advantages from this.”

In the area of software development, Audi CEO Markus Duesmann took over as Chairman of the Supervisory Board, in which the expertise of the brands is to be bundled and further expanded. “Our investment planning tells a clear story: we are not cutting back on the substance of products, and are giving full priority to expenditure on electromobility and software development,” says Duesmann. “The thorough-going focus on group synergies for these central future themes is an important key to success.”

Further, Audi cites the use of the MEB for the Q4 e-tron models, and the Premium Platform Electric (PPE) developed with Porsche as examples of synergies and the cross-brand implementation of the electric platforms. However, the Ingolstadt-based company does not mention the single-handed approach to the Artemis project launched under Duesmann.

BMW to withdraw from Formula E