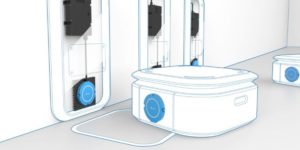 WiTricity has licensed its inductive charging technology to Delta Electronics. The agreement allows Delta to build and sell wireless charging systems for a wide range of industrial applications, including driverless transportation systems and electric forklifts.

The agreement therefore does not apply to the electric car sector. The inductive charging solutions from the cooperation can also be used in car factories via driverless transport systems and contribute to the scaling and further development of the technology via use in factory automation.

According to the communication, wireless charging products based on WiTricity technology should be able to be used in a wide performance range. Specifically, WiTricity mentions “from a few hundred watts for small mobile robots, to tens of kilowatts for forklift trucks, even to hundreds of kilowatts for heavy machinery”. This is intended to replace not only the work involved in possibly manually plugging in the charging cable or the electrical plug connections at the docking stations, which WiTricity believes are “notoriously prone to error”. According to WiTricity CEO Alex Gruzen, “For full scale factory automation, people must be taken out of the charging process,”.

“Wireless charging is expected to bring substantial benefits to factory automation in regard to improved equipment productivity, safety and reliability, and reduces the total cost of ownership for equipment,” said Roger Ogden, general manager of Delta’s Industrial and Medical business unit.

In the automotive industry, WiTricity has recently partnered with Hyundai’s Genesis brand. A collaboration with General Motors was also launched in 2016 and with Nissan in 2017. Even though there is no mass production product yet, WiTricity has not given up its efforts. In February 2019, the charging specialist acquired the Halo technology platform and various patents in the field of contactless power transmission from Qualcomm.

Previous offerings, from BMW for example, are proprietary solutions, that only work with a charging pad that is precisely matched to each vehicle. SAE International presented a standard in October that enables charging of any vehicle with the infrastructure, but this standard is not yet used in practice. China also set a standard for inductive charging in May, relying on WiTricity technology.