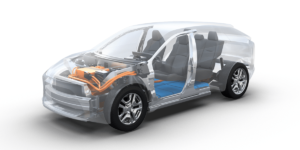 Toyota is now revealing more about its new e-TNGA platform. The company has just announced production preparations for a new SUV model with a purely electric drive based on the new platform.

The new platform is to be modelled on the Toyota New Global Architecture, which is designed as a mixed platform. Here, though, the e-TNGA is specialised in electric drives. Toyota says the new platform allows “development times for different model variants to be reduced and individual models to be developed in parallel.”

Toyota says the first model based on the e-TNGA has already been developed and is currently being prepared for production. The still nameless battery-electric vehicle will be produced in a pure electric car plant in Japan and was developed in conjunction with Subaru. The Subaru model called Evoltis was announced in spring, which is likely to be the planned twin of the SUV model announced by Toyota in the C segment. The Evoltis is scheduled to celebrate its world premiere at the Tokyo Motor Show in October 2021. Toyota says that further details of its own e-SUV will be announced in the coming months.

Toyota will follow up the mid-size SUV with other e-TNGA products, including a compact crossover being developed in cooperation with Suzuki and Daihatsu, a mid-size crossover, a large SUV, as well as a sedan and a minivan. In total, there will initially be six models based on the new modular architecture.

According to an earlier report, the e-TNGA platform will use battery sizes between 50 and 100 kWh, combined with two engine types with a power spectrum between 80 and 150 kW. Small electric cars are to have a range of 300 km, larger ones between 500 and 600 km, according to project manager Koji Toyoshima. Initially, conventional lithium-ion cells will be used for the e-TNGA while Toyota continues to aim for solid-state cells.