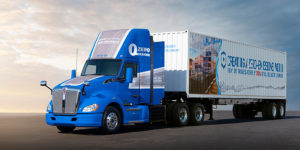 These fuel cell truck prototypes are to serve at the ports of Los Angeles and Long Beach. Testing on drayage routes is currently being prepared. Andrew Lund, Chief Engineer, Toyota Motor North America Research and Development, added that the prototypes not only use production-intent hardware but would allow Toyota to start looking “beyond drayage into broader applications of this proven technology”.

Said technology stems from Toyota’s fuel cell model, the updated Mirai. For the new set of Class 8 heavy-duty trucks, Toyota has adapted the latest system iteration to a Kenworth T680 chassis. A more compact hydrogen storage cabinet behind the cab houses six hydrogen tanks with the same capacity as previous prototypes while a new, more powerful lithium-ion battery helps smooth out the power flow to the electric motors, says Toyota. The fuel cell trucks claim a range of over 300 miles, just about 500 kilometres when fully loaded with up to 36 tons. Toyota and Kenworth have been working on these trucks since 2017 and intensified the cooperation in 2019 when testing began in California.

In Japan, Toyota and Hino Motors have signed a cooperation agreement with retail chains Seven-Eleven, FamilyMart and Lawson. These agreed to test light commercial vehicles powered by fuel cells. The small trucks with a gross vehicle weight rating of up to three tons will run between several distribution centres and stores in 2021. Toyota and Hino claim a range of 400 kilometres for the delivery FCEVs. Based on the trial results, the partners plan to consider further steps, such as hydrogen filling stations, from 2022 onwards.

Toyota also plans to engage in discourse beyond the customer trial of what it calls FCETs (fuel cell electric trucks). The five companies would “be making efforts to promote the establishment of an environment for the popularisation of fuel cell vehicles, not only of light-duty trucks but also of commercial and passenger vehicles,” writes Toyota.