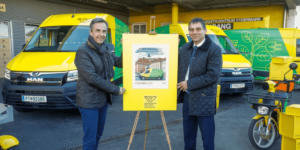 The electric delivery van from MAN Truck & Bus has received a special honour in Austria: Austrian Post has immortalised the MAN eTGE on a stamp. The occasion was the anniversary of the 2,000th electric vehicle that Austrian Post put into service at the beginning of December.

The occasion for the honor was that the Austrian post office managed to integrate the 2,000th electric vehicle in their fleet at the beginning of December. This vehicle was a MAN eTGE, one of 25 supplied to the Austrian postal service.
mantruckandbus.com